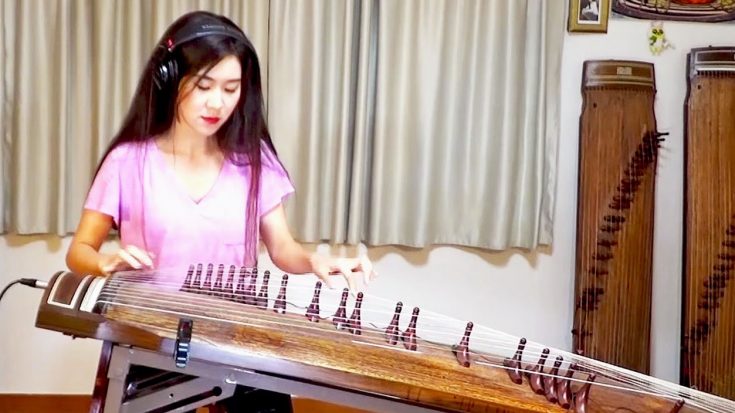 You’ve probably heard “Free Bird” played on just about any instrument you could imagine. Of course there’s guitar covers, but we’ve also heard people play Lynyrd Skynyrd‘s soaring ballad on the drums, a mandolin, and even a ukulele.

Since joining YouTube in July 2009, Luna Lee has generated over 19 million video views and over 128,000 subscribers. Those millions of people have tuned in to watch her offer her take on some of the world’s most well-known songs. And she does so with the coolest instrument you’ll ever see.

Luna plays her covers on an instrument called a Gayageum. The Gayageum is a traditional Korean string instrument, typically with a total of 12 strings. For her covers, Luna mashes up the Gaygeum’s traditional sound with rockin’ tunes, such as Jimi Hendrix’s “Voodoo Child” (her most popular video, with nearly 5 million views), AC/DC’s “Back in Black,” and of course “Free Bird.”

Luna decided to focus on the guitar jam at the end of “Free Bird,” which is perhaps the most recognizable, but also the fastest, part of the song. It seems hard enough to make your hands fly over a guitar’s six strings, but Luna has no trouble keeping up with the song on her Gaygeum’s 12.

The sheer speed of Luna’s playing is too impressive to even begin to describe. But beyond that, we’re really digging the sound of the Gaygeum on that guitar jam!

Go ahead and tune in to the video below to watch Luna work her magic on “Free Bird.” If you want to watch her put her twist on other rock classics, be sure to visit her YouTube Channel here.