Lari White & Travis Tritt Sing About Lost Love In Video For Their Duet, “Helping Me Get Over You” 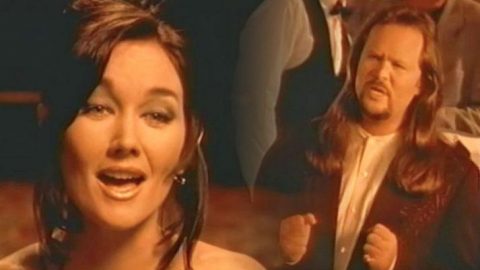 During the 1990s, Lari White and Travis Tritt were two of the most popular artists in country music at the time. Because of this, it only made sense for the two to collaborate, which is exactly what they did.

Together, White and Tritt wrote a duet they could sing, which was titled “Helping Me Get Over You.” Equal parts heartbreaking and passionate, the duet is told from the perspectives of two lovers who have since parted ways.

The lovers eventually go on to find other people to share their lives with, but the desire is lacking in their new relationships. As they each reveal, the only reason they are seeing someone new is because they are helping them get over each other.

Clearly, country fans were able to relate to the agonizing struggle depicted in “Helping Me Get Over You,” because the song became a hit. It climbed all the way to the 18th spot on the U.S. Hot Country Songs chart, and reached the 21st spot on the country chart in Canada.

“Helping Me Get Over You” was released in 1997, and White and Tritt had been friends ever since. That’s why Tritt was devastated to learn the news that White had passed away in January 2018.

Tritt took to Twitter to express his grief, writing, “She was so talented and a joy to write and record with.”

I’m extremely saddened by the passing of my friend Lari White. She was so talented and a joy to write and record with. My heart goes out to all of Lari’s family and friends during this extremely difficult time. https://t.co/9w90keDEff

Remembering Lari With Her Music

Watching the official music video White and Tritt filmed for “Helping Me Get Over You” will show you just how talented White was.

The video elaborates on the story told in the lyrics, but makes everything more dramatic. It opens with Tritt enjoying lunch with his new love, when suddenly he spots White walking across the street. The two notice each other and exchange glances, but go their separate ways.

Later, White and Tritt encounter one another at a party they attend with their new loves. But they forget about everyone else once they see each other, and break out into a passionate exchange.

The ending is something you’ll have to see for yourself, because we don’t want to spoil it for you.

If you want to hear yet another duet of White’s, look no further than the video below. In it, she sings John Michael Montgomery‘s “I Love the Way You Love Me,” which her husband co-wrote. If her duet with Tritt didn’t bring a tear to your eye, this one is sure to.