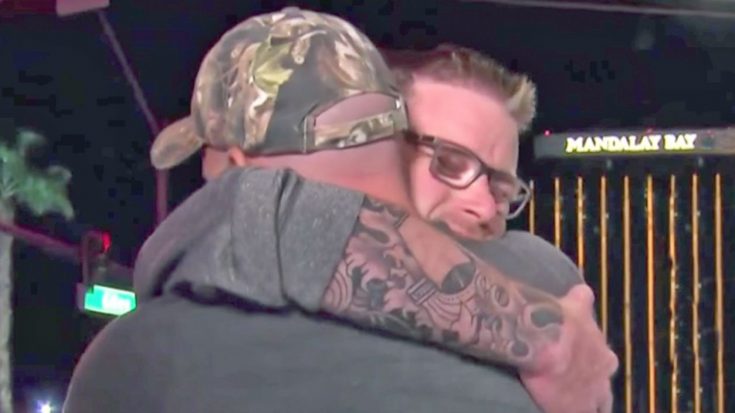 59 people were killed and over 500 were injured in the horrific mass shooting on Sunday (Oct. 1) at the Route 91 Harvest Festival in Las Vegas. As more time passes, we are learning more about the victims, as well as some of the heroes who risked their own lives to help complete strangers get out of the venue.

Tom McIntosh and his wife began running to safety when the gunman began shooting. He helped her and another female concertgoer climb over the wall of the outdoor venue when he was struck by a bullet in his leg.

“I jumped over the wall and kind of walked trying to get away [but I was] bleeding really bad,” McIntosh told Today‘s Savannah Guthrie. “Somebody tried to help me, and he wasn’t really doing it right and then James came along and tied up my leg and kept me from bleeding anymore.“

This man who helped him, James Lawson, and another man put McIntosh in a truck and took him to the hospital. Without Lawson’s help, McIntosh says he knew he wouldn’t have made it.

“By the time I got over the wall, my pants were already soaked and my shoe was full of blood. No, I wouldn’t have made it. I know I wouldn’t have. I’m very thankful that James was there and helped me,” he said.

Guthrie revealed that Lawson and McIntosh were complete strangers and had never met before this incident. McIntosh previously mentioned to her that’d he like to tell the man who saved his life, “Thank you,” and she somehow made it happen for him right then on live TV.

She re-introduced the two men, who embraced each other with a hug. You can hear McIntosh whisper, “Thanks, buddy. I appreciate it,” to Lawson.

Lawson said he saw McIntosh with a make-shift tourniquet, which was in the wrong spot.

“I adjusted the belt, got it up there where it should be, tightened it down, stopped the bleeding, hung out there for 10-15 minutes and some savior in a pickup truck asked if we needed a ride. We said, ‘Yeah’ and threw them all in the bed of a pickup truck and we took off the hospital,” he explained.

It was an emotional reunion for the two men who were lucky to make it out of the scene alive.

Watch their reunion below.