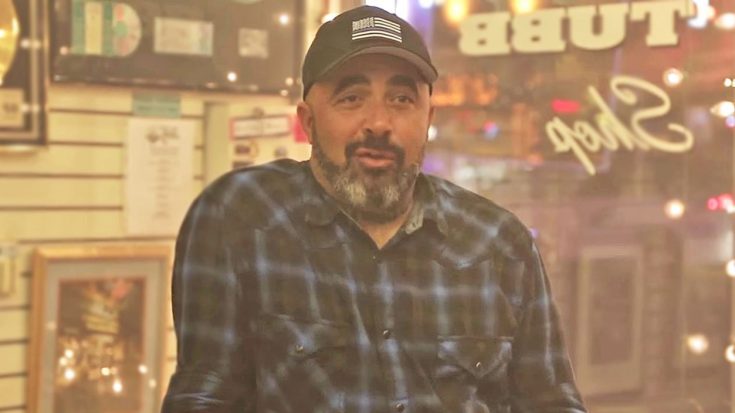 When it came time to put together his music video for “That Ain’t Country,” Aaron Lewis and director Jim Wright knew exactly what style they were going for. Since the song is all about celebrating the artists of country music’s past, they wanted the video to have a distinct classic country influence.

The two had no need to search any further for a setting than the streets of Nashville. Rich with history, there were an endless number of places they could have stopped to film. But when it came down to it, they picked a specific place because its historical ties are some of the strongest in the city.

That place was Ernest Tubb‘s famous record store, which is located on Broadway in Nashville. During a behind-the-scenes clip about the making of the “That Ain’t Country” video, Lewis explained why they picked that particular place.

“Because of its history in Nashville we thought that this would be the perfect place to have the setting of the live performance of the video,” he said.

That live performance portion of the video was filmed with a whole crowd of people watching. But these folks weren’t all hired actors brought in exclusively for the video. Instead, Lewis revealed that they took a unique approach when it came to finding their extras.

“We just collected people up off the street that were here enjoying Nashville,” he said.

In total, Lewis and the crew were filming for well over half a day, and were there until past four in the morning. Now that’s dedication! All of that time was worth it, because the video for “That Ain’t Country” turned out to be one awesome piece of work.

Tune in below to learn more behind-the-scenes information about the video, then check out the finished product in the second clip you see!