Lee Brice Gets Choked Up After Young Sons Crash His Concert

By Jennifer Pernicano on February 22, 2018
Advertisement 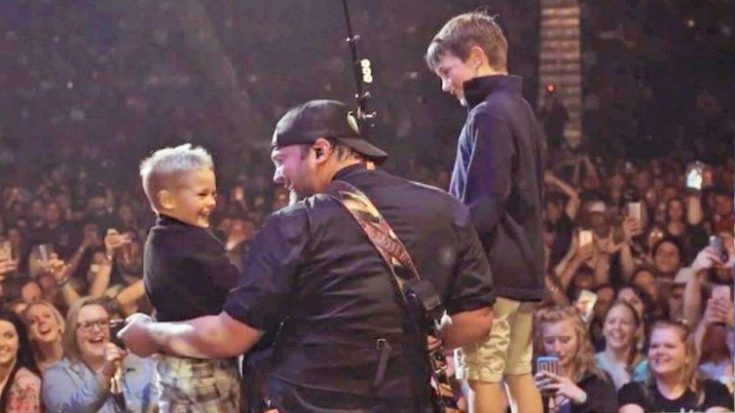 In 2017, Justin Moore and Lee Brice teamed up for a co-headlining American Made Tour. William Michael Morgan was their opener for most of their dates, with newcomer Brett Young joining them as well.

Can’t wait to kick of 2017 on the American Made tour with Justin Moore and give y'all a sneak peek into a few songs off the new record! http://LeeBrice.com/Tour

Brice, who is known for his hits “Parking Lot Party,” “I Drive Your Truck,” and “I Don’t Dance,” is also a talented songwriter, penning Garth Brooks’ “More Than A Memory.” While he can sing the heck out of a rambunctious party song, Brice really excels at the heart-wrenching ballads, including his June 2017 single, “Boy.”

Even though his wife was pregnant at the time with their first daughter when he released the song, Brice said, “It’s just the right time for this song.”

Merry Christmas! Hope y’all had the most beautiful day surrounded by the people you love????

Brice revealed why he chose the emotional song in a Twitter video announcing its release.

“The first thing I saw when I heard this song was me and my daddy. And right after that, I saw my little boys. It’s just a simple song called ‘Boy’,” he said. “I realized that ‘Boy’ just had this kind of no-brainer, as soon as you hear the first word, you’re in. On top of that, I could mean every word I say every time I sing it. I’ve got two boys at home and, it’s kind of ironic, I’ve got a girl on the way.”

Brice and his wife, Sara, celebrated their fourth wedding anniversary a few days ago, but couldn’t be together, as Brice had a show that night. He posted a sweet tribute to her on social media.

What Brice didn’t know was that Sara had plans of her own for their anniversary – bringing their sons to watch him perform! As he was performing “Boy,” their sons, Takoda and Ryker, ran on stage to surprise their dad.

Completely taken by surprise, Brice stopped singing to give his boys a hug, and glanced backstage with a very confused look on his face.

“What are you doing here?!” he asked them.

“My wife is here, it’s our anniversary! She wasn’t supposed to be here,” he told the crowd.

What an incredible gift to be with family on such an important day! It was an emotional moment between a father and his sons, and we’re so happy we got to share it with them. Watch the surprise below.