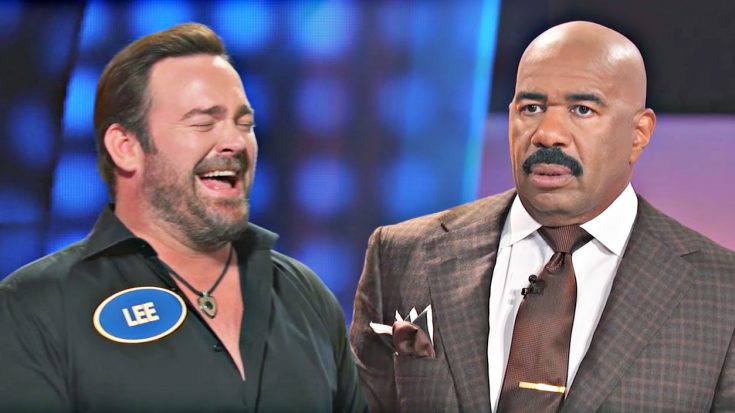 Warning: Some viewers may find these videos unsuitable due to crude humor. Viewer discretion is advised.

These funny cousins of a country singer send everyone’s favorite host rolling with laughter when the reveal their answers to the panel’s questions!

Celebrity Family Feud is one of the hottest game shows on television right now and they’ve been featuring a lot of Southern and country music families – all of which we’ve had a blast watching!

During a recent episode, country music singer/songwriter Lee Brice and his hysterical family take the stage to answer the question, “You’d hate to wake up to find your dog licking your…what?”

Up first is Brice’s cousin Felicia, who doesn’t miss a beat when the baton is passed to her and the opposing team misses the time!

“Well, I don’t have any of these…but balls?” She said before issuing a bout of nervous laughter.

With this, the whole family and Steve Harvey are doubled over with laughter, but the episode gets even better!

Heading on over to Brice’s other cousin, Houston, Harvey prompts him to fill in the missing answer on the board with the same question.

“This gonna be too good of an answer, right here,” Harvey says to Houston, repeating the question.

This hilarious answer sends the whole family into a funny frenzy and you can hear some of them hoot and holler as Harvey goes into a brief monologue about the hysterical response.

Watch both of these funny clips in the videos below!