By Manly Bryant on August 25, 2016
Advertisement 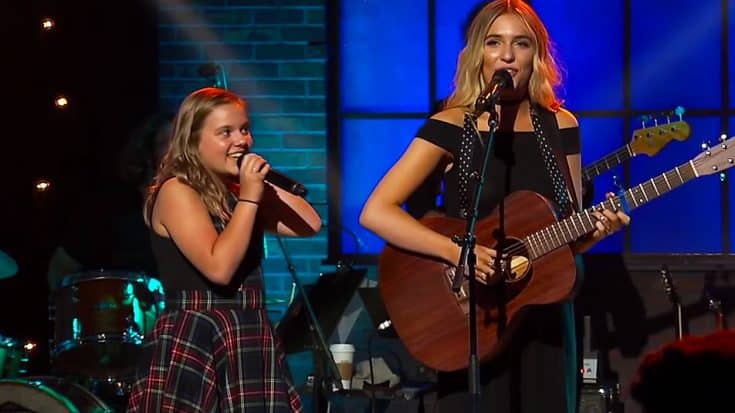 Beloved county music duo Lennon & Maisy have been taking the musical world by storm since their first video debut in 2012 covering Robyn’s “Call Your Girlfriend”, adding a unique twist to their performance that showcased their various talents to social media worldwide! The sisters’ groundbreaking performance included both Lennon Stella and sister Maisy Stella, then ages thirteen and nine, harmonizing vocals, in addition to the young girls creating the song’s beat with nothing more than empty butter containers! The incredibly talented performance went viral overnight, allowing these two talented girls to acquire a work Visa in order to leave their hometown of Ontario and bee line to Nashville!

Since then, their career has skyrocketed, accepting opportunities to be featured in various, widely-popular magazines and perform at the Grand Ole Opry, not to mention they’re stars in the hit TV show Nashville! If this isn’t a dream come true, we don’t know what is!

Now 17 and 13, the dynamic duo recently performed at Skyville Live, a venue that pairs influential musicians with their iconic mentors and idols to create an original sound and generate monumental moments for performers, as well as the fans who attend the events! Sisters Lennon and Maisy took to the glorious stage and performed an original, acoustic rendition of “Boom Clap” by Charli XCX that is taking viewers and fans to new levels of elation! The angelic and pure collaboration is not only chock-full of talent, but effortless grace!

The combination of these two voices produced a powerful, soothing performance of a song in which was originally classified as an “Electropop” song due to its heavy usage of synthesizers and prominent electronic/pop influence.

Upon completion of their beautiful melody, the young sisters received a very well deserved applause and humbly thanked their vibrant audience!

We can’t wait to see what these talented girls perform next! Watch their stellar performance below and tell us what you think!