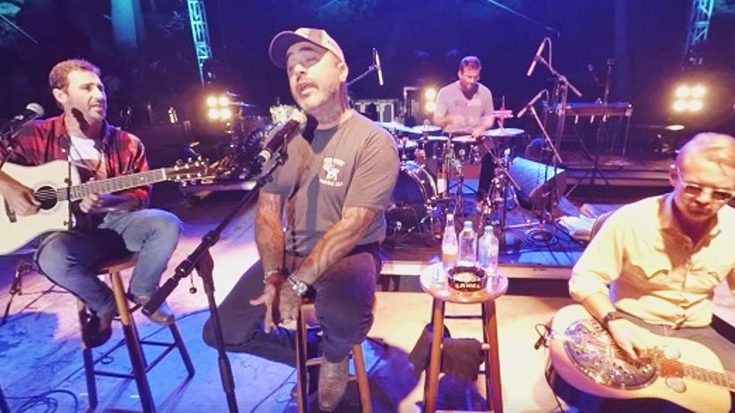 July 20, 2017 was a sad day for music lovers far and wide. On that day, Chester Bennington, the lead singer of rock band Linkin Park, passed away.

News of Bennington’s death affected artists from all genres, with many expressing their grief on social media. Others opted to pay tribute to him through song, such as Aaron Lewis.

Although Lewis is a country artist now, he was previously the frontman of the rock band Staind. As a result, Lewis got the chance to meet and work with Bennington over the years, and the two developed a close friendship.

After Bennington passed away, Lewis honored him at his show that night by playing the Staind song “Something to Remind You.” The moment was an emotional one for everyone involved, and for all who later watched the video of the performance.

In August, Lewis and some of his famous friends gathered in North Hampton, Massachusetts for his 6th Annual Aaron Lewis & Friends show. The show benefited the It Takes a Community Foundation, which is described by its Facebook page as an organization established “to help revive rural communities across New England by providing assistance to strengthen, enrich and preserve these communities.”

During the show, Lewis, some of his former Staind bandmates, and other friends came together for a heart-tugging tribute to Bennington. The song they chose to perform was “Crawling,” which was recorded and originally released by Linkin Park in 2001.

Lewis has close ties to the song, because he was the featured vocalist on its remixed version. Titled “Krwlng,” this new version of the song appeared on Linkin Park’s 2002 album Reanimation.

Knowing Lewis’ personal connection to the song makes his tribute all the more powerful. You can tune in below to watch it. The clip is a 360 video, so feel free to move around to get a look from all angles.

May Bennington rest in peace.