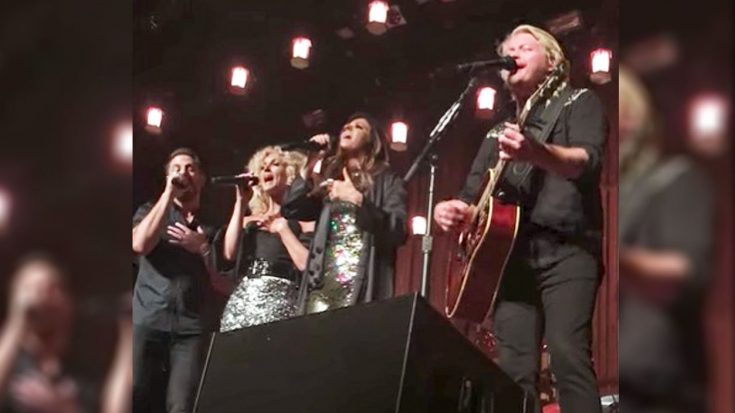 As the news began to spread that Montgomery Gentry‘s Troy Gentry had passed away on September 8, grief-stricken artists reacted on social media. Little Big Town was one of the first artists to respond, sharing a smiling photo of Gentry along with a short message on Instagram.

“Absolutely devastated to hear the news,” they wrote in part.

Absolutely devastated to hear the news. Troy, thank you for your kindness, your spirit, your joy and the love you shared with everyone you met.

On Thursday (September 14), Little Big Town honored Gentry’s life and legacy by performing at his celebration of life service at the Grand Ole Opry. Since Gentry was known for his patriotism and love for his country, Little Big Town performed the National Anthem to open the service.

But Little Big Town didn’t stop their tributes to Gentry there. The group took the time to honor him during their shows at the Ryman Auditorium on Friday (September 15) and Saturday (September 16).

For their tribute, Little Big Town sang a short selection from the Montgomery Gentry song “My Town.” Released in 2002, “My Town” reached the fifth spot on the Hot Country Songs chart and crossed over to claim the 40th position on the Billboard Hot 100.

While Montgomery Gentry’s version of “My Town” contains a bit of the duo’s rowdy spirit, Little Big Town’s cover was soft and tender. The group was able to showcase their breathtaking harmonies through the performance, which had the crowd cheering multiple times.

Tune in below to watch Little Big Town remember Gentry with their impressive performance of “My Town.”

It’s still so hard to believe that Gentry is gone, but his legacy will live on through the music he gave us. May he rest in peace.