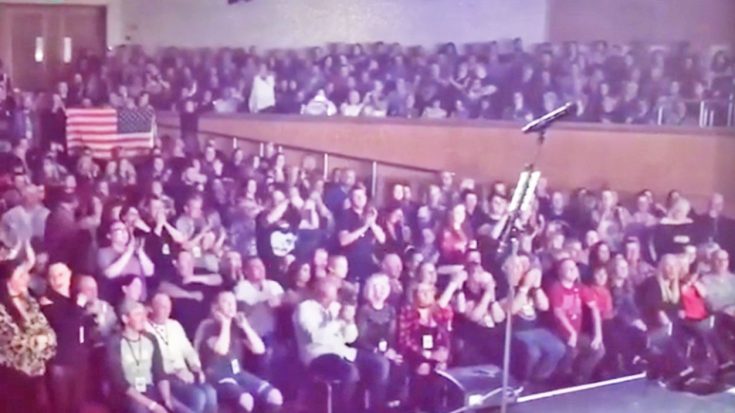 From halfway around the world, country music fans showed their support for those affected by the senseless act of violence that took place at Route 91 Harvest Music Festival in Las Vegas this past Sunday (Oct. 1).

Little Big Town was shown some love from their fans across the Atlantic Ocean at their show at Glasgow Royal Concert Hall in Scotland the day after the Vegas tragedy when their audience began chanting “USA!” in the direction of the stage, one fan even holding up an American flag.

“Thank you so much!” said band member Kimberly Schlapman, an emotional Philip Sweet seen walking off stage, wiping tears away from his eyes. “It takes a whole lot of people to put on our shows. And I have a whole lot of friends in Las Vegas,” she said before continuing, “We are holding it so close to our hearts. So we are here to do what country music does, and that is love!”

In 2016, the Grammy-award winning country quartet played Route 91, the tragedy hitting especially close to home for the four artists.

One year ago we played Route 91 on Sunday night. Our prayers are with all the first responders, artists, crew and mostly the country fans. pic.twitter.com/CTGg7Qm6MJ

Following the crowd’s gesture of solidarity, Little Big Town shared the powerful video to their social media along with a meaningful message.

“Wish you could feel the love from Scotland last night. It was powerful and emotional & we’re gonna do everything we can to spread it around,” the band wrote on their Facebook page.

The alleged shooter behind the attack has been identified as Stephen Paddock whom opened fire from the 32nd floor of hotel and casino Mandalay Bay where he was checked in.

For those in the Vegas area, Stoney’s Rockin Country is hosting a Solidarity Concert Wednesday (Oct.4). All the proceeds will go to the Las Vegas Victims’ Fund with scheduled performers including Tony Jackson, Carter Winter, and Scotty Alexander.

You can learn more about Stoney’s concert here. Wish you could feel the love from Scotland last night. It was powerful and emotional and we’re gonna do everything we can to spread it around.