Little Boy Catches Fish And You Won’t Believe Your Eyes 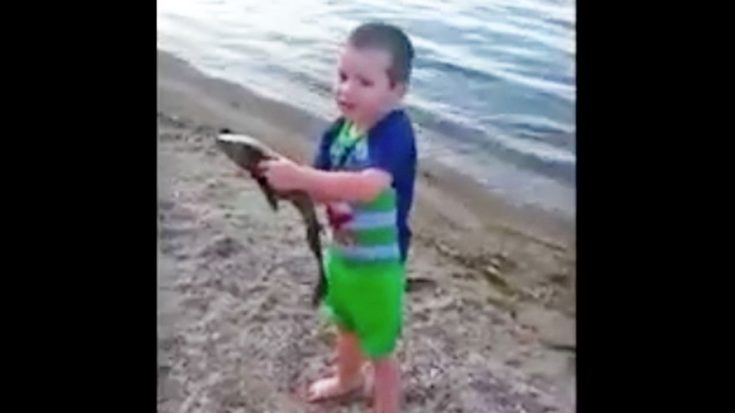 In the south, catching your first fish is a right of passage. A tiny tot by the name of Jack ran head first into the ocean in hopes of catching a large fish he spotted swimming around in the water near where he and his family were seated on the dock.

“Give me that now!” he said as he grabbed a fishing net from a family member filming the outing, later ditching the tool in favor of kicking it old school and use his bare hands to battle to the slippery beast. “I wanna catch that big guy,” the miniature fisher-boy exclaimed as he prepared to face off against the fish.

After kicking off his shoes, Jack hopped off the dock, ran fast through the sand, and leaped into the ocean. With a bit of guidance from his family, Jack managed to corner the fish near the shoreline before he picked up the slimy creature, onlookers immediately bursting with applause.

“Wow you caught it with your bare hands!” is heard from behind the scenes as the young boy grabs the respectably sized fish. Jack proudly showcased his catch to his family, beaming with pride at his accomplishment.

You can watch the adorable video below.

This kid is awesome, he catches a nice size fish with his Bare Hands

Posted by FishFiends on Thursday, September 14, 2017