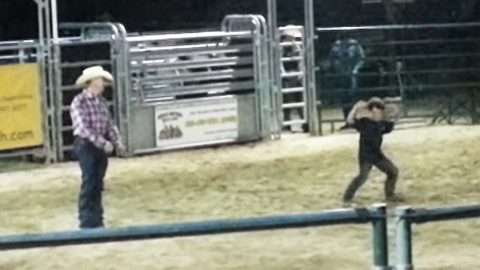 One rodeo took quite the different change of pace when their riveting arena became a showdown for an epic dance off between two unsuspecting guests! An audience member was quick to whip out her phone and record the thrilling moment when an older cowboy and a young boy took to their newfound dance floor and battle it our for the winning dance title!

The crowd was heard fighting a variety of laughing fits as the little boy choreographed an impromptu dance to the widely known hit “Who Let The Dogs Out?” Baring full confidence and an arsenal of dance moves, this little guy seemed like a sure bet to win this thrilling battle! However, our cowboy was far from letting his guard down, getting down and dirty as he showcased an admirable worm move as he bounced along the arena floor and spun out with his breakdance inspired finale!

The audience could not get enough of these two dancers, both competing against another and even teaming up for hysterical hip bumps and serious sass! As if the clip wasn’t good enough, the little boy tears off his shirt upon the wrap of the battle and basks in his applause from an incredibly eager crowd!

Check out the video below and tell us who you think took the trophy!