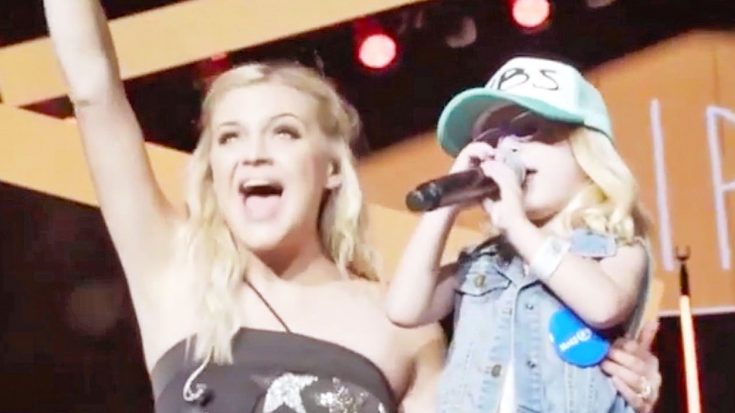 One special little girl named Holin loves Kelsea Ballerni so much that she made a wish to Make-A-Wish America to be able to sing with her. The organization was able to get in touch with Kelsea, who helped make Holin’s dream come true.

Kelsea was more than happy to invite the sweet girl to sing with her during her show on Friday (September 8). She handed Holin a microphone, and asked the little girl to sing along with her on her hit song “Dibs.”

Released in July 2015, “Dibs” is the second single off of Ballerini’s debut album The First Time. The song became the second number one hit of her career and reached the 58th spot on the Billboard Hot 100.

Little Holin loves “Dibs,” and she made that clear when she joined Kelsea to sing it. She even had the song’s title scribbled on the front of her hat!

Despite her young age, Holin didn’t seem the least bit scared about being in front of a large crowd. She sang “Dibs” with enthusiasm, and even sang on her own for a little while without Kelsea’s assistance.

Kelsea seemed to be enjoying every minute of her duet with Holin, as she was smiling the entire time. We bet she was impressed by Holin’s courage and sweet voice!

Tune in below to watch a priceless memory in the making as Kelsea and Holin sing “Dibs” together. This is the kind of stuff we love to see!

This is Holin and her @makeawishamerica was to sing with me on the big stage. She's a little superstar in every way. What a special night.