Little Troubadour Sings His Heart Out In Front Of Entire School 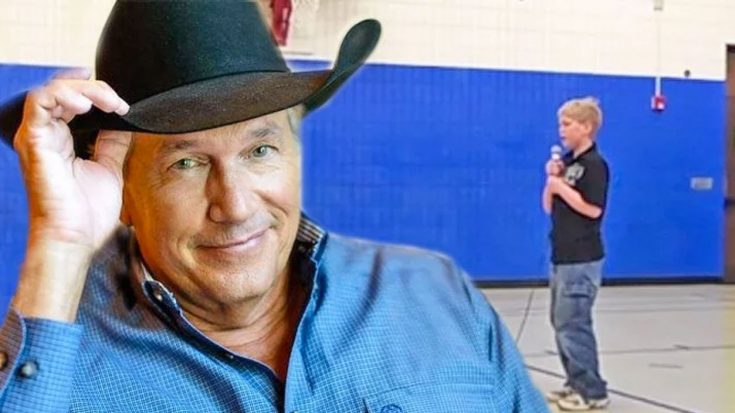 Wow. We’ve seen a lot of George Strait covers, but this one might just be our favorite.

When Young Brayden took the stage in front of all of his Elementary School classmates at the yearly talent show, the crowd gave him a huge round of applause. They clearly knew they were about to get a great show.

With all the confidence in the world, Brayden picked up the microphone and began singing George Strait’s “I Saw God Today.”

Brayden’s classmates were mesmerized by his awesome performance, as were we!

Strait released “I Saw God Today” as the first single from his 2008 album Troubadour. The single debuted at number 19 and eventually became Strait’s 43rd Billboard number one.

On this day back in 2008, George Strait was at #1 on the Country chart with Troubadour?? #KingGeorge pic.twitter.com/x6KNomor8D

Strait, and Brayden, sing about a man whose wife just had a baby. The man discovers a flower growing out of a crack in the sidewalk, a couple who are expecting a baby, and the colors of the sunset. He then tells his newborn baby about all the times he saw God that day through the flower, the couple, the sunset, and his baby girl.

I just slowed down to stop and stare,
opened my eyes and man I swear,
I Saw God Today…. #GeorgeStrait pic.twitter.com/oPAy7VZUrG

When Brayden finished his performance, his classmates erupted in applause and cheer. As he walked through the crowd, he gave a few high fives to his friends.

Brayden’s performance was one that even The King of Country himself would be proud of. Watch it below.