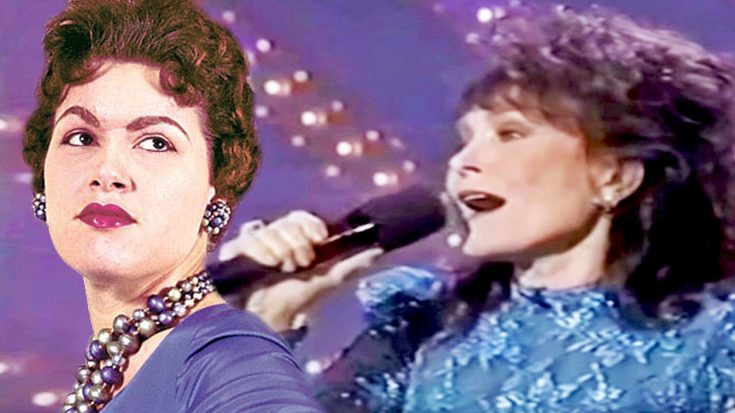 When Loretta Lynn was still trying to get her footing in the country music world, Patsy Cline was the one who helped her find it. She served as a strong source of support for Lynn in those early years, and Lynn is eternally grateful as a result.

When Cline passed away in 1963, Lynn was beyond devastated. Once her twin girls were born the following year, she named one of them Patsy as a way of honoring her best friend.

Lynn has continued to pay tribute to Cline over the years. In fact, she recorded an entire album dedicated to her memory and music.

That album was titled I Remember Patsy, which was released in 1977 as Lynn’s 26th studio album. The album featured Lynn’s covers of some of Cline’s most memorable songs, including “Crazy,” “Sweet Dreams,” and “I Fall to Pieces.”

We recently came across some undated footage of Lynn singing “I Fall to Pieces” live, and it’s delightful. Wearing a sparkling blue dress, Lynn stood center stage as she sweetly sang the words that her friend made famous years ago.

Lynn also had a few powerhouse moments in her performance that are sure to leave you in awe. Those moments came during the chorus, as Lynn hit and held the high notes with beautiful intensity.

You can scroll down below to catch Lynn’s splendid little cover of “I Fall to Pieces.” We hope you enjoy it!

Other than Cline, we couldn’t think of anyone better to sing “I Fall to Pieces” than Lynn. We’re sure that Cline would have been proud of her performance.