By Miranda Raye on August 21, 2017
Advertisement 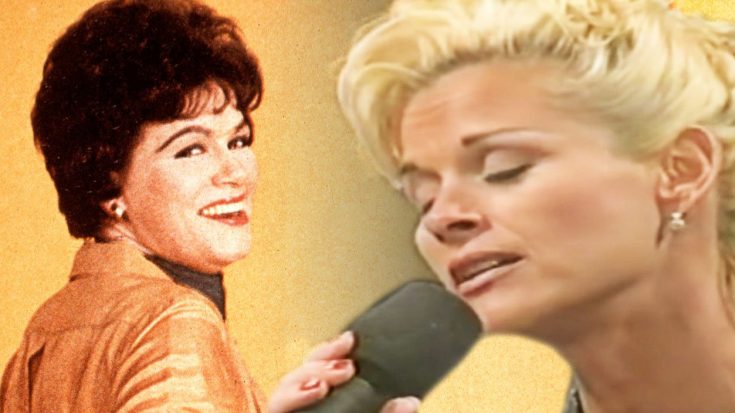 In all of country music, few songs are considered as timeless as Patsy Cline‘s “Crazy.” Believe it or not, the song was not a number one hit for Cline. Despite this, the song has gone on to earn the distinction as her signature piece.

Written by Willie Nelson, “Crazy” was originally intended for Billy Walker. But he turned the song down, saying he felt that it was better suited for female artist. The tune eventually landed in Cline’s hands, and her recording reached the second spot on the Hot Country Singles chart and the ninth spot on the Billboard Hot 100.

The song put Nelson on the map as both a singer and songwriter. Today, it remains a country music staple and is one of the most-frequently covered songs by other artists.

We’re sure you’ve heard “Crazy” done a number of times before. But we bet you’ve never heard it quite like Lorrie Morgan sings it.

Morgan came to prominence decades after Cline was ruling the charts with “Crazy.” She earned her first number one hit, titled “Five Minutes” in 1990, and two others followed.

In addition to experiencing great success with her own songs, Morgan often takes the time to honor the country legends who came before her. That’s exactly what she did some years ago when she sat down and paid tribute to Cline with “Crazy.”

Morgan remained true to Cline’s original version of the song, and didn’t bother to take too many liberties with her performance. She honestly didn’t need to, because her dazzling voice was captivating enough all on its own.

The crowd of people who gathered around Morgan were clearly impressed with her performance. Many of the spectators jumped to their feet after she finished singing, honoring her with a well-deserved standing ovation.

Once you watch Morgan sing “Crazy” in the video below, you’ll understand why they reacted in such a way. It’s one of the most outstanding tributes to Cline that we have ever heard.