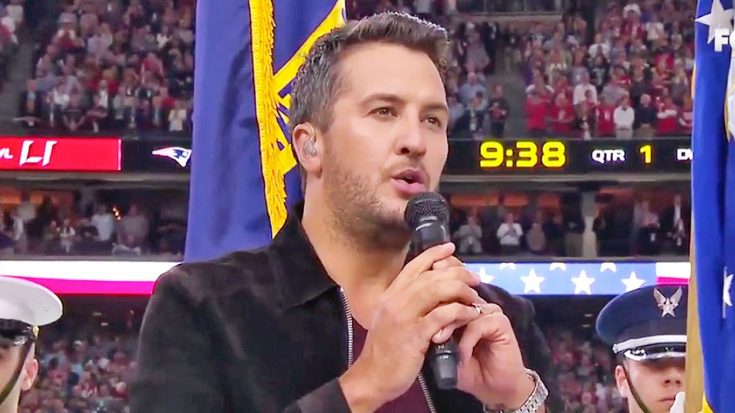 Last year, Luke Bryan became the sixth country artist to ever sing the National Anthem at the Super Bowl. Speaking to People, Bryan shared his reaction to being asked to perform. “I said, ‘Hell yes, I’ll do it!‘”

It was eventually announced that pop star P!nk would be singing the National Anthem at this year’s Super Bowl game. While P!nk may be a pop artist, country fans are familiar with her thanks to her chart-topping duet with Kenny Chesney, “Setting the World on Fire.” In addition, P!nk was one of the scheduled performers at the 2017 CMA Awards, where she sang one of her new songs, “Barbies.”

P!nk has often been hailed by fans and critics alike as having one of the best voices in the music industry right now. But does Bryan feel the same way about his Super Bowl National Anthem successor?

During an interview with Entertainment Tonight, Bryan dished out his feelings about P!nk. Based on what he had to say, we can tell he’s a fan!

“P!nk is one of the best singers on planet Earth and I know she’s going to do an unbelievable job with the National Anthem,” he said.

Bryan admitted that singing the National Anthem at the Super Bowl is a “nerve-wracking” experience. But he said he feels completely confident that P!nk will be able to crush those nerves in order to deliver a stunning performance.

“She’s been on the big stage for a lot of years, certainly even more than me, so I know she’ll do great and good luck, P!nk,” he said.

We have to wait just a bit longer to catch P!nk prior to the Super Bowl, which is on February 4. In the meantime, relive Bryan’s brilliant National Anthem performance prior to last year’s game in the video below.

What about you, are you excited to hear P!nk’s take on the National Anthem? Let us know!