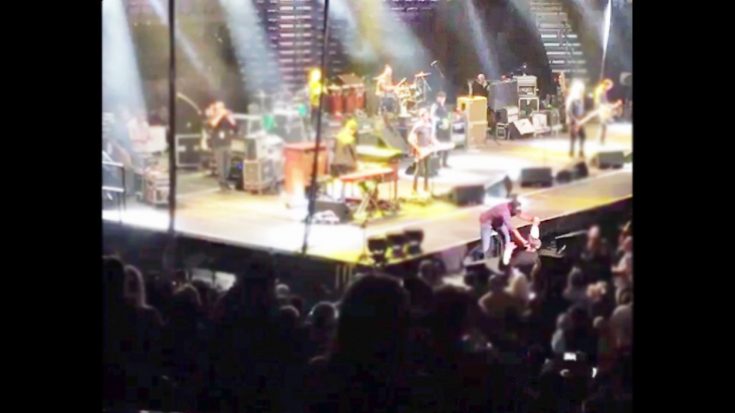 Kid Rock, Larry the Cable Guy, Chris Stapleton, Travis Tritt, Luke Bryan and Charlie Daniels all came together for one of the most epic Volunteer Jams the state of Tennessee has ever seen.

This year’s Volunteer Jam was a celebration of Daniels’ 80th birthday and fans flooded the Bridgestone Arena to hear some good country music and celebrate a legend.

According to Taste of Country, the evening drew more than 15,000 fans and raised $245,000 for the organization Journey Home Project.

During the music-filled evening, Bryan performed a set that included his hits “Play It Again”, “Rain Is A Good Thing”, “Huntin’, Fishin’, and Lovin’ Everyday”, and his latest single, “Move”.

During “Move”, he was performing like he normally does, with his signature booty shake, when a man in the front row wearing a black shirt with white long sleeves appeared to stand up and flip him off. Bryan did not like this at all, and in between lyrics said, “Come on!” to the man.

He stepped down from the stage and while singing, he allegedly swung at the unruly heckler. Security rushed over and proceed to escort the man out of the arena. Bryan continued on like nothing happened and finished the song.

It’s difficult to see what exactly occurred, so watch it from a couple different angles below and let us know what you think in the comments.