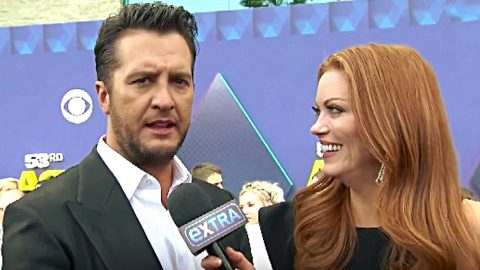 How Does Bryan Feel About American Idol?

So far, Luke Bryan has been having a grand old time as a judge on the rebooted version of American Idol. He’s already developed a bond with the other judges, pop star Katy Perry and his personal musical hero, Lionel Richie.

“Katy is crazy as hell, but it’s a good crazy…Lionel is like just our sweet Papa Lionel,” Bryan told Extra on the blue carpet at the ACM Awards on Sunday (April 15).

But his Idol experience hasn’t been all fun and games. As Bryan shared, he’s actually received hate mail from viewers who tune in to the show.

He Wasn’t Prepared For The Hate…

During his interview with Extra, Bryan made it clear that he was completely unprepared to deal with the horrors of hate mail he’d receive as an Idol judge. He said that most of the angry letters sent to him are from fans who are upset that he and the other judges sent certain singers home.

As Bryan said, it’s not like he finds joy in rejecting the singers who compete on Idol.

“I wasn’t prepared for the fans to get so mad at me for people that we send home,” he said. “But we have to send somebody home. We love them all!“

Bryan said that some of the hate mail sent to him has been downright nasty, with some viewers threatening to stop being fans of his completely.

Speaking about some of the letters, Bryan said they read, “I’m ripping up tickets to your concert, you’re awful, you’re a horrible human being!“

Even though the hate mail is surely upsetting to see, Bryan doesn’t seem to be too bothered by it. Hey, you’re always going to have your critics!

Tune in to the clip below to watch Bryan’s full interview with Extra, in which he talks more about his hate mail and his time on Idol so far. Despite everything negative he’s had to deal with, it’s obvious that he’s still having a blast on the show!