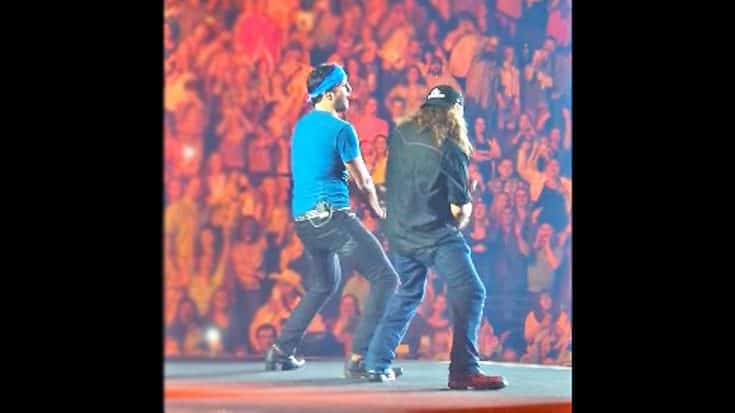 Luke Bryan has made it his tradition to teach his fans how to “shake it” whenever he performs his hit song “Country Girl (Shake It For Me)” on tour. Bryan will even bring fans up on stage to give them a personal dance lesson in front of the entire crowd.

During one particular concert in 2014 in Bossier City, Louisiana, Bryan chose to invite an extremely famous fan of his on stage, none other than his good friend and Louisiana native, Willie Robertson.

After Bryan performed the beginning of “Shake It,” Robertson made his appearance on stage. You can see Robertson show up around the 2:33 mark in a video from the performance we’ve included below.

Robertson can be seen mimicking Bryan’s every move, and started shaking his hips as the crowd cheered like wild.

Bryan then brought Robertson up front and center, and asked “You ready to give it to ’em?”

Robertson proved that yes, he was ready. He continued to copy all of Bryan’s moves and got down to the ground while shaking his hips.

As Bryan moved around the stage and started singing again, Robertson kept dancing, sometimes throwing in a few moves with a bit of his own, personal style.

After Robertson’s big finish, Bryan made sure to give his buddy a high five for “shaking it” like a pro. You can check out his dance in the video below.

We never would have guessed that Robertson could groove like that!