By Jennifer Pernicano on January 16, 2018
Advertisement 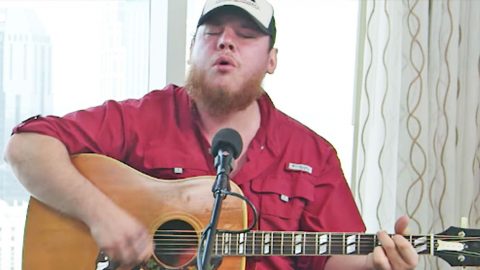 Many fans have been praising Luke Combs for bringing back real country music, but we think they’re using the wrong terminology. Country music never left, you might have to look a little harder to find it, but it’s always been there.

Take Combs for example. He released his very first EP back in 2014 without a label. A little over a year later, he signed to River House Records and released an EP titled This One’s For You. It reached No. 24 on the Billboard Country Albums chart in 2015.

He then signed with Columbia Nashville, an imprint of Sony Music Nashville, and in 2017 released a full studio album of the same name. With the re-release of his first single “Hurricane” – he first released it in 2015 and it hit No. 46 on the charts – Combs took over the number one spot on the Country Airplay chart for two weeks. This paved the way for his June 2017 album release.

This One’s For You hit number one on the country albums charts and number five on the all genre Billboard 200 chart.

Like many artists before him, Combs has never strayed from his original sound and often performs songs from his first two EPs that he released on his own. One of those songs is the fan favorite “Can I Get An Outlaw.”

Combs stopped by the Country Rebel Skyline Sessions during the Country Radio Seminar in 2017 and performed an acoustic version of “Can I Get An Outlaw.”

Although this version is performed on a much smaller scale than how he normally does it on stage, you don’t feel like you’re missing out on anything. Just Combs and his guitar is complete perfection. His signature gritty vocals standout while singing lyrics that you can tell he passionately feels.

When the song is over, you’ll be pressing “repeat” because it really is that good. Watch Combs perform “Can I Get An Outlaw” in the video below.