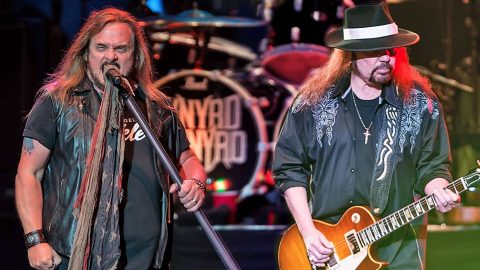 The Hidden Gems Of A Recent Record

Lynyrd Skynyrd has always been a band that doesn’t play around, so when they released a song called “Dead Man Walkin’,” no one was surprised.

The song was released off of their 2003 album Vicious Cycle. The album also included an updated rendition of the band’s old song “Gimme Back My Bullets,” featuring Kid Rock.

In addition to the updated “Gimme Back My Bullets” and “Dead Man Walkin’,” Vicious Cycle contained a number of other notable songs. Just a few of its tracks include “Red, White, & Blue,” “All Funked Up,” and “Crawl.”

The album also sports an emotional track that shows how deep the connection between the Skynyrd bandmates truly is. Titled “Mad Hatter,” the song serves as a tribute to the group’s late bass player, Leon Wilkeson, who passed away two years prior to the album’s release.

Can’t Help But Sing Along To This One

I have Lynyrd Skynyrd jamming in the truck dead man walkin'

We can’t help but sing along when Van Zant sings the fiery chorus, “When wrong is right and right is wrong. Oh there’s a dead man walkin’ tonight.”

Take a listen to the rough and tough song below.