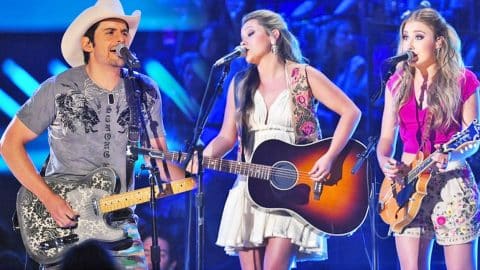 Country superstar Brad Paisley was joined on stage at his concert in West Palm Beach, Florida by country power duo Maddie & Tae for a beautiful performance of his smash hit “Whiskey Lullaby.”

Part way through the song the two female country stars joined Paisley on stage and the crowd showed their enthusiasm through wild applause. Maddie & Tae’s silky vocals harmonized beautifully with Paisley’s for the overall melancholy feel of the song.

“We found him with his face down in the pillow with a note that said I’ll love her till I die,” the three sing together. “And when we buried him beneath the willow, the angels sang a whiskey lullaby.”

“Whiskey Lullaby” is about a couple who undergoes a painful separation driving both to alcoholism as an attempt to drink away the memory of each other by putting the bottle to their heads and pulling “the trigger.”

“Whiskey Lullaby” was originally recorded by Brad Paisley featuring Alison Krauss and was released off Paisley’s Mud on the Tires album in 2004. The song went on to be certified 2X Platium and also peaked at No.3 on the U.S. Billboard Hot Country Songs chart.

You can watch the hauntingly beautiful performance in the video below but be sure to keep a tissue handy.