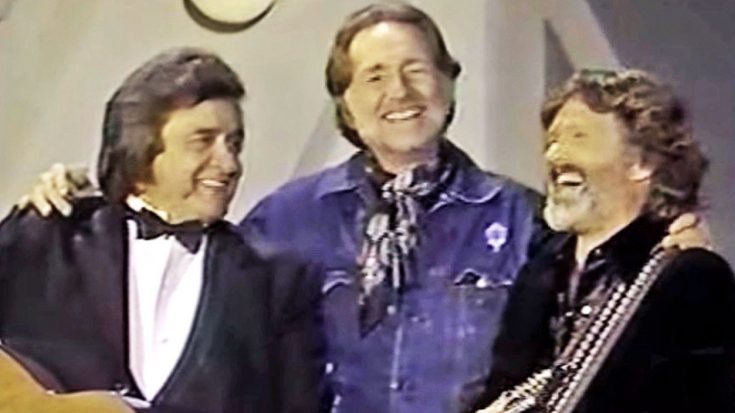 Johnny Cash, Willie Nelson, and Kris Kristofferson. When it comes to country music it really doesn’t get any bigger than those three names right there. Cash, Nelson, and Kristofferson are all regarded as legends, and their music continues to influence artists both young and old.

Country artist Roger Miller was the first to record “Me and Bobby McGee,” and he took it all the way to the 12th spot on the Billboard Hot Country Songs chart. Other country artists also tried out the tune, including Kenny Rogers and Kristofferson himself.

But no recording of “Me and Bobby McGee” is more popular than Janis Joplin’s version, which was released posthumously following her death on October 4, 1970. Her recording topped the Billboard Hot 100 and also reached number one on the chart in Australia.

Since Joplin’s rendition is so well-known, many tend to forget that “Me and Bobby McGee” started off as a country song. But we’re here to remind you of that with one excellent performance of the song, courtesy of Cash, Nelson, and Kristofferson.

The three country icons gathered together to sing the song on a television show in 1985. Cash and Kristofferson started off as the only ones on stage, with Cash playing guitar for Kristofferson while he sang the song he wrote years before.

Nelson suddenly appeared once they hit the chorus, and all three of them joined in and started singing at once. Cash took over on the second verse, and Kristofferson eventually joined in with him in a little duet.

By the time they reached the chorus again, Nelson reemerged and joined his friends to finish out the song. Man, we wish we could have been in the audience to see this!

At least we have a video from the performance so we can enjoy it whenever we want. You can too if you scroll down to where we’ve placed the clip below.

Folks, it doesn’t get any better than this right here!