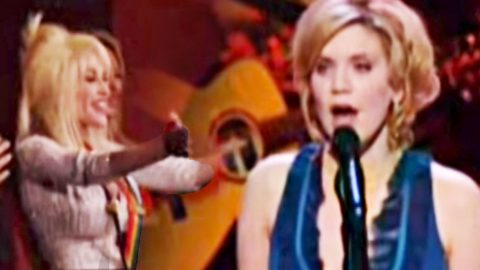 In a treasured moment for one of country music’s greatest musicians, she was honored with a tribute to one of her biggest hits and her life’s work by an incredibly talented colleague.

Taking the stage during 2006’s Kennedy Center Honors to celebrate the immense accomplishments of Dolly Parton, country and bluegrass star Alison Krauss poured every bit of her heart and soul into a chilling cover of “Jolene” that left Parton positively beaming with joy.

This 1973 hit is one of Parton’s signature songs that has been performed time and time again by a seemingly endless number of performers and groups. Since its release, “Jolene” has sold millions of copies and become one of the world’s most-recognized songs.

Watch Alison Krauss deliver one of the most beautiful covers of “Jolene” in the video below and let us know what you think in the comments!