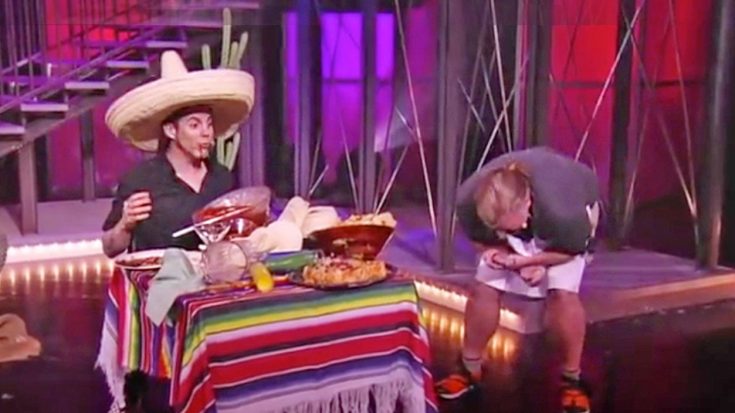 Viewers were ‘shocked’ when one brave man chose to enter a karaoke competition that forced the contestant to sing with one major, and painful, catch! Jumping onto the show Killer Karaoke, hosted by Jack Ass veteran Steve O, our burly contestant was instructed to serve a Mexican combo dinner to the host while undergoing a series of random electric shocks.

Singing The Allman Bros. classic tune “Ramblin’ Man”, our man Michael Daniel did just that as he scampered to one end of the stage to retrieve various food items and serve them to Steve O. Bringing his first tray, Daniel sang the lyrics, “Lord, I was born a ramblin’ man / Tryin’ to make a livin’ and doin’ the best I can,” before enduring a shock that sent the man tossing his food! However, nothing was going to hold this tenacious man back, as he powered through pouring the host a margarita amidst random shocks and nonstop laughs.

Even Daniel himself was experiencing laughter as he toppled to the floor and sent an expected meal crashing to he ground. However, he ran through his performance and earned a standing ovation from his audience!

Killer Karaoke experienced two seasons, kicking off its debut back in 2012. Contestants competed against one another for the chance at winning $10,000. Be sure to check out the video below!