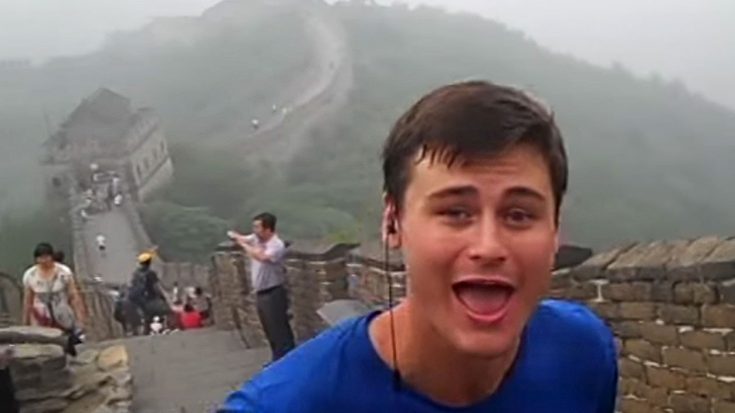 Boyfriend of the year Jack Hyer shocked viewers with a meticulously planned out wedding proposal that, over a span of 4 years, incorporated 26 different countries! Hyer took to Youtube to introduce his masterpiece, admitting to his viewers that just four years back he had gone on his first date with his longtime girlfriend, Rebecca. Once the initial date wrapped up, Hyer scrambled to his travel journal to jot down a small, but monumental, note, writing, “I am going to marry this girl, eventually.”

Over a span of 4 years, Hyer was given the opportunity to travel to an abundance of incredible locations, utilizing his 26 adventures to slowly film his epic marriage proposal for the woman of his dreams. Creating a heartwarming montage to the classic tune “I’m Gonna Be (500 Miles)” by The Proclaimers, this hopeful boyfriend wowed viewers with his creativity and lovable personality.

As the video comes to its end, Hyer is seen in a small restaurant surrounded by friends and family as he shows the admirable clip to his girlfriend. Hearts melted as he turned and spoke, “I’ve been on many adventures… but the best adventure I’ve ever had is with Becca.” Of course, the lucky girl said yes, thus starting a future of many more adventures and stories.

You can watch the incredible video below!