By Manly Bryant on March 2, 2018
Advertisement 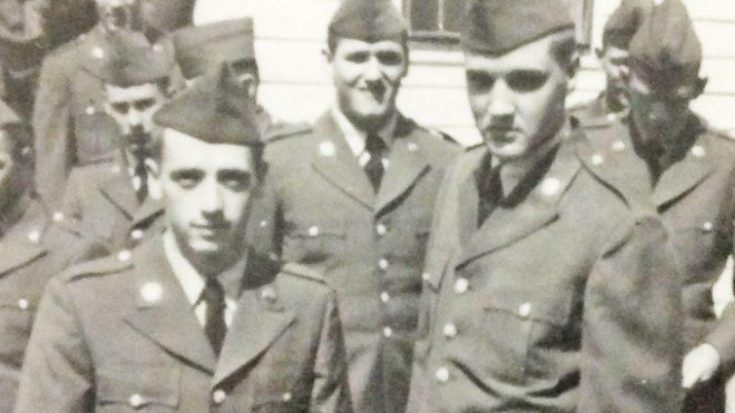 On March 24, 1958, Elvis Presley traded in his guitar for military fatigues in order to serve his nation.

Seeing as The King did not serve alone, many brave men served alongside Presley who was already an international sensation at the time. One of those men was none other than Frank Rowe of Hershey, Pennsylvania.

“I don’t believe it!” is the main consensus after sharing he served alongside Presley, which is a pretty understandable concern to have. However, he has a photo of himself standing next to Presley in front of their barracks at Fort Hood, Texas as well as a photograph signed by The King himself.

“I’d like to have somebody tell me that it’s fake,” he says regarding his photo with Presley according to Press And Journal. The two attended basic training together at Fort Hood in 1958 after both were drafted into the Army, and were just two of the 174 soldiers at the training camp.

“He was pretty darn big,” Rowe said in terms of Presley’s fame at the time. “Women came by the truckload…It got so bad that he had to move off post. He’d come to work in the morning in a big Cadillac or Lincoln.”

Even though he was one of the biggest stars of the time, to his fellow soldiers, he was just one of the guys. The King won their camaraderie during a game of tag football where he reportedly tore up the field, Rowe recalling, “From that second on, Elvis was a good old boy.”

After basic training, Rowe and Presley shipped off to Germany together. While The King was not allowed to sing during the long voyage, one night during their travels he played the piano to a packed room.

“You couldn’t get near (him). The room was packed. You could hear him play, but you couldn’t see him,” said Rowe.

The military typically keeps the troops whereabouts top secret, but miraculously the word of Elvis’ Germany arrival got out because by the time their ship arrived at port, the ladies of Germany were waiting for him. Once he arrived in Germany, the two parted ways – Presley sent to Friedberg and Rowe was sent elsewhere where he operated as a tanker – and the pair forever lost touch.

Presley served as an active duty member of the military until March of 1960 and was fully discharged from the Army Reserves four years later in March of 1964. Rowe’s family has a longstanding tradition of men serving in the military, with his father serving in France during World War I and his son, Dan, serving in the Air Force alongside his wife Debbie.