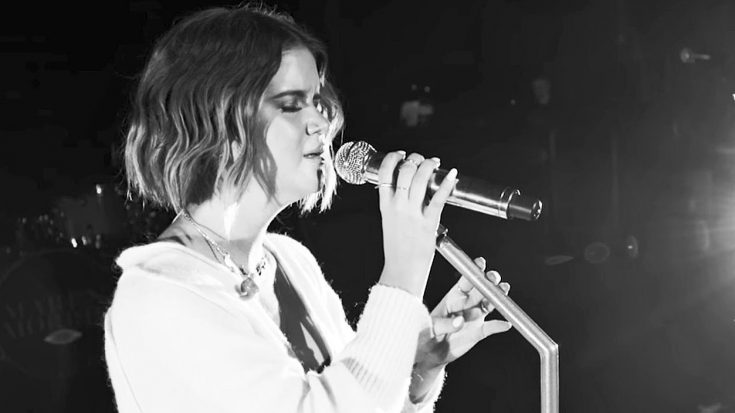 Three years ago, Maren Morris felt compelled to write a song called “Dear Hate.” Despite all of the time and care that she poured into the piece, she decided not to release it.

Over the next three years, Morris debated whether or not she should release the song. She always opted not to, until recently.

On October 1, over 50 people were killed and hundreds more were injured during a shooting that took place at the Route 91 Harvest Festival in Las Vegas. Although Morris was not there that night, she was one of the performers on one of the previous days of the festival.

Upon hearing the news, Morris finally decided to bring “Dear Hate” into the light. Recorded as a duet with Vince Gill, Morris made it clear from the start that all proceeds raised from the song would go to a fund to assist those affected by the shooting.

As of press time, Morris’ official video for the song has generated over one million views in a little under a week. The song also sits in the Top 10 on the iTunes best-selling songs chart.

After receiving such a warm response to the song, Morris decided to perform it live for the first time at her concert Kalamazoo, Michigan on October 5. That night also marked the first time that Morris had performed since she appeared at the Route 91 Harvest Festival in Vegas.

Speaking to the crowd, Morris explained the story behind the song and how she hesitated to release it for so long. Wiping away her tears, she then asked everyone in attendance to join her in a brief moment of silence in remembrance of all who were killed.

After that, Morris moved into a tender performance of “Dear Hate.” You could read the emotion on her face and hear it in her voice as she sang. Her voice was placed in a particularly vulnerable spot, since Gill wasn’t there to sing backing vocals. This vulnerability made her performance all the more powerful and raw.

Following her performance, the entire crowd rose and gave Morris a well-deserved standing ovation. We’re sure there wasn’t a dry eye to be seen that night.

Tune in below to watch Morris bare her pain through her first-ever live performance of “Dear Hate.”

If you’d like to do your part to help the victims of the Vegas shooting, you can do so by donating to the Las Vegas Victims’ Fund. Verified by GoFundMe as an official fundraiser, proceeds raised from the fund will go directly to victims and families affected by the shooting.