By Miranda Raye on April 17, 2017
Advertisement 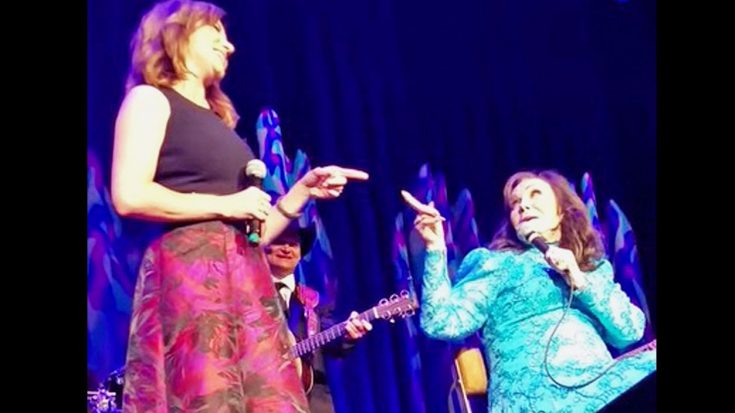 Loretta Lynn‘s 85th birthday was on April 14, 2017 and she celebrated in a big way. She had a birthday concert at the famed Ryman Auditorium, and was joined by her sisters Crystal Gayle and Peggy Sue Wright.

Lynn’s birthday concert also featured a surprise guest…the extremely talented Martina McBride. She delivered a beautiful gift of yellow roses to Lynn and also teamed up with her to sing some of her songs.

Everyone loves “You Ain’t Woman Enough” for its spunky, sassy vibe, which is exactly what McBride and Lynn brought to their performance of the song. With Lynn seated in a chair at center stage, McBride stood faithfully by the country legend as she sang along with her.

That friendship was placed on full display during their duet on “You Ain’t Woman Enough.” There were a couple points where McBride looked over at Lynn to see if she wanted to sing, but Lynn urged her to continue on her own.

Lynn was the one who concluded the little duet, with a big smile on her face as she finished the final note. You also won’t be able to keep yourself from smiling when you watch her sing with McBride in the video below!

This is the type of stuff we love to see…artists from two generations working together to honor the history of country music. It doesn’t get any better than this!