By Jennifer Pernicano on September 12, 2016
Advertisement 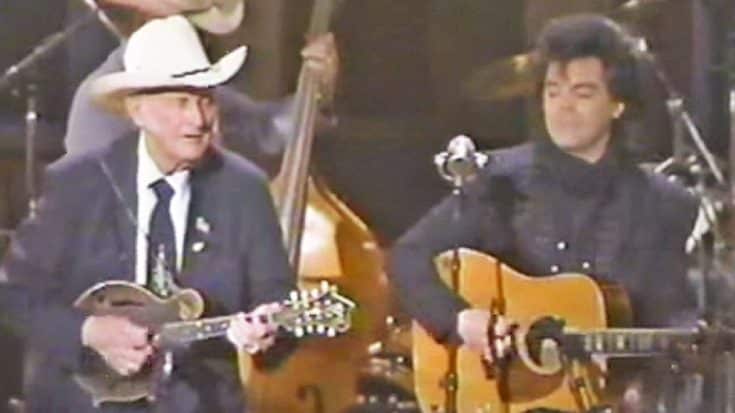 Those are only some words that describe the late Bill Monroe. He created the bluegrass genre of country music and is a hero to many singers and musicians today.

In 1988 he released his eighteenth studio album titled Southern Flavor, which won him a Grammy for Best Bluegrass Recording (Vocal or Instrumental). The album included ten recordings, five of which were written by Monroe himself.

In the early 1990s, Monroe stopped by the variety television series American Music Shop with his friend and fellow country legend, Marty Stuart. While a band played behind him, Stuart introduced his very special guest.

“You know in 1939, this man came to town with a unique brand of music, all his own that he called bluegrass,” Stuart said. “Now we’re 50 years later and he’s still going strong. An American original and American treasure. Would you make welcome for the great Bill Monroe.”

A round of applause was heard for Monroe, who asked, “Would you let me play one on the Mandolin for the folks?”

“I wish you would,” Stuart responded.

They dove into a high-energy version of Monroe’s classic “Southern Flavor”, which will have you clapping along in no time!

Watching the skill Monroe possesses on the mandolin is mind boggling. No wonder he’s called the Father of Bluegrass!

Enjoy the performance below.