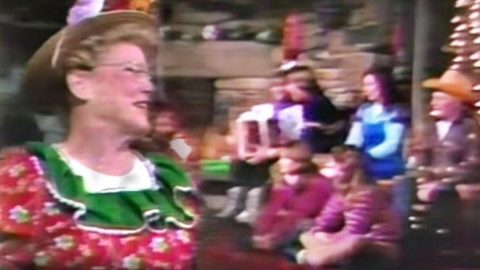 This fan-favorite Opry star welcomes some of our beloved country legends into her home for a holiday series that is sure to delight you all season long!

In this stunning television special, Pearl appears with a large number of her country singer friends for a Christmas medley of songs that will warm your soul!

The 80s were a special time for country music and this stunning medley of songs only goes to show how great of a time it was!

Beginning with a massive square dance, Pearl hoots and hollers as her friends join hands and dance around the massive home before breaking out in beautiful songs like “White Christmas”, “A Marshmallow World”, “I’ll Be Home For Christmas”, “Silver Bells” and more!

A recently uploaded video, one of the longstanding members of The Oak Ridge Boys even came across this wonderful gem online and opened up about what this time in his life was like and how much it means to him!

“What a GREAT memory,” Joe Bonsall writes about the video. “There were three [videos] altogether and this was by far the best one!”

This is just one of the few videos that shows a time in Glen Campbell’s life that he was dating fellow country superstar, Tanya Tucker and they sing several songs together for this medley in front of the flickering fire.

Loretta Lynn, husband Doolittle and their darling family also make an appearance in the TV special, singing several songs both outside around a fire with Tom Wopat and inside as they sit in the middle of a pile of gifts by the fire.

This was just a few years before Lynn would welcome the folks at Crisco into her home to film several adverts about her legendary baking skills and recipes!

Watch this unforgettable Christmas medley from some of the biggest country legends below!