Miranda Lambert “Dropped Everything” To Duet With John Prine In 2016 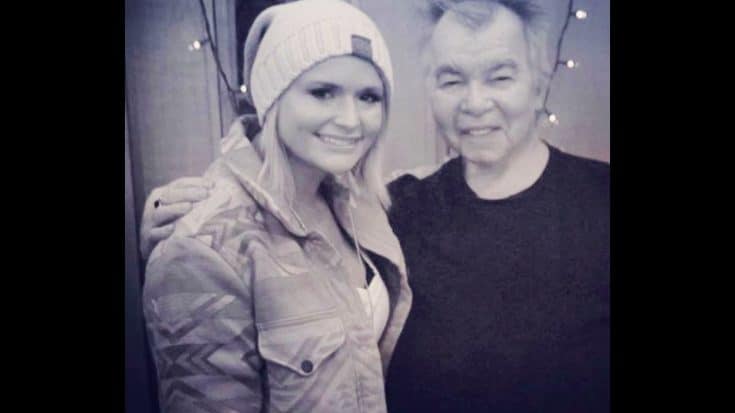 There are many people out there who would drop everything in order to sing a duet with Miranda Lambert. She always felt the same about one country music icon.

So even when she was going through a rough patch, she willingly put everything on hold to duet with the man she had great respect for.

Who was this man? Well, it was none other than the late, great, John Prine, who was an influential member of the country music community for nearly 50 years. He passed away on April 7, 2020.

From Fiona Whelan Prine… Our beloved John died yesterday evening at Vanderbilt Medical Center in Nashville TN. We have no words to describe the grief our family is experiencing at this time. John was the love of my life and adored by our sons Jody, Jack and Tommy, daughter in law Fanny, and by our grandchildren. John contracted Covid-19  and in spite of the incredible skill and care of his medical team at Vanderbilt he could not overcome the damage this virus inflicted on his body. I sat with John – who was deeply sedated- in the hours before he passed and will be forever grateful for that opportunity. My dearest wish is that people of all ages take this virus seriously and follow guidelines set by the CDC. We send our condolences and love to the thousands of other American families who are grieving the loss of loved ones at this time – and to so many other families across the world. Thank you from the bottom of our hearts for the outpouring of love we have received from family, friends, and fans all over the world. John will be so missed but he will continue to comfort us with his words and music and the gifts of kindness, humor and love he left for all of us to share. In lieu of flowers or gifts at this time we would ask that a donation be made to one of the following non profits: thistlefarms.org roomintheinn.org nashvillerescuemission.org

Although he was a singer, Prine is most well-known for his talents as a songwriter. He wrote everything from humorous pieces about current events to more serious songs that told sad stories inspired by his life.

Lambert always admired Prine, which is why she agreed to sing with him even though he asked her during a tough time in her life. As Prine explained in a 2016 interview with People, he called Lambert to ask about a duet in January 2016, just a few months after she announced her divorce from Blake Shelton.

“It wasn’t a really good time for her to do it, but she dropped everything and showed up,” he said.

Because of her situation, Prine decided to let Lambert pick which song she wanted to sing. He didn’t want her to sing something sad if she didn’t feel comfortable with it, which is why he left the choice up to her.

“I let her pick the song, because of all the stuff that was going on in the newspapers,” he said. “I didn’t want to ask her to come in and do a divorce song, or to do a sad song, I said, ‘You can pick a sad one or a happy one and I’ll go along with it.’“

We’d say that Lambert ended up making a good choice, because she decided to join Prine on his cover of Hank Williams‘ “Cold, Cold Heart.” You can never go wrong with a Hank Williams classic!

The combination of Prine’s more weathered voice and Lambert’s sweet tone made for a beautiful duet. We’re glad that Lambert found the time to sing with him.

Listen to Lambert and Prine’s duet of “Cold, Cold Heart” below and let us know what you think!