Miranda Lambert ‘Flipped Out’ When She Heard Duet With Jason Aldean

By Miranda Raye on April 12, 2018
Advertisement 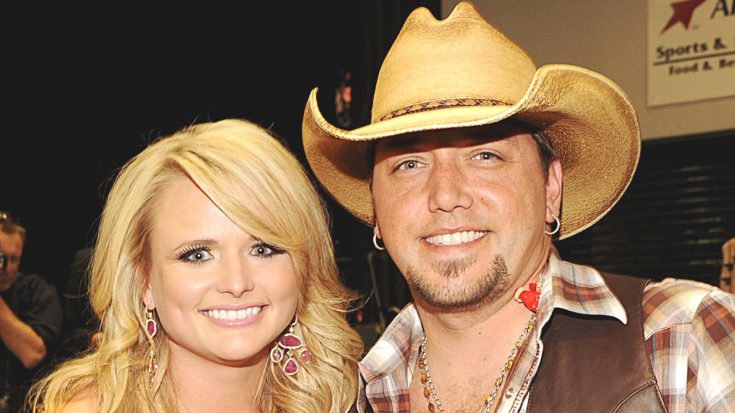 When Jason Aldean revealed the tracklist to his new album, Rearview Town, he unveiled a collaboration he had managed to keep secret for months. That collaboration is a track called “Drowns the Whiskey,” with Miranda Lambert as a featured vocalist.

“Drowns the Whiskey” isn’t the first time that Aldean and Lambert have ever recorded together. The two sang on a track called “Grown Woman,” which appeared on Aldean’s 2007 album Relentless.

Since working on “Grown Woman,” Aldean and Lambert have remained good friends. The two often toured together early in their careers, resulting in a lifelong friendship and mutual admiration.

“I dig Miranda,” Aldean said during an interview with NPR. “I think she’s a great artist. I’ve always said if I was a female, I probably do the kind of stuff Miranda does, like ‘Kerosene.'”

So when it came time to put material together for Rearview Town, Aldean decided to send Lambert a song. He had a few in mind that he thought she would sound good on, but finally picked one.

However, Lambert wasn’t really pleased with the song Aldean sent along. “I had one that I sent…and she was kinda iffy on the song,” he recalled. “I said, ‘Listen, if you don’t love the song, let’s not do it. I’ve got another one.‘”

An Extreme Reaction To The Winning Song

That other song he had was “Drowns the Whiskey.” A more traditionally leaning track about heartbreak and the woes that come with it, the song was right up Lambert’s alley.

Speaking to Taste of Country, Aldean shared Lambert’s extreme reaction when she heard the song for the first time. “When I sent her that one, she kind of flipped out,” he said. “She was on board then. And then she came in to sing it and nailed it.”

Instead of being a true duet, “Drowns the Whiskey” is mainly carried by Aldean, with Lambert providing harmonies as support. Still, the result is spectacular, and Aldean says it’s one of his favorite songs on his new album.

So far, you can only hear “Drowns the Whiskey” by visiting the NPR website and tuning in to the audio clip there. Once you’re done, relive the magic Aldean and Lambert created on their first duet “Grown Woman,” which you can catch below.