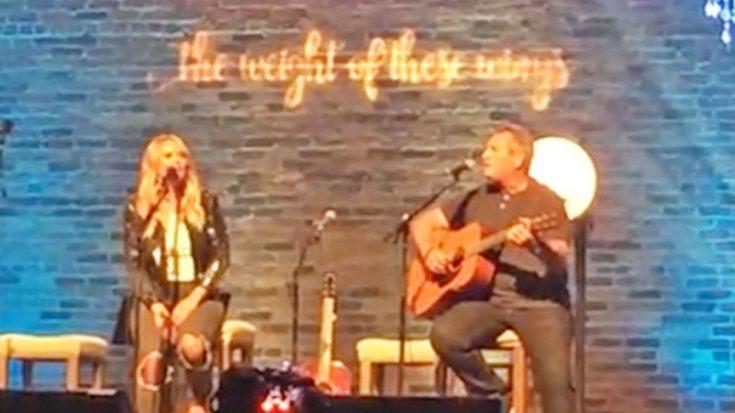 Looks like Miranda Lambert inherited some of her talent from her father. Dedicating her taping of the latest “Front and Center” to the songwriters she has teamed up with over the course of her impressive career, it was only fitting she lend the stage to her first ever co-write, her father, Rick Lambert.

Lambert and her father co-wrote her song “Greyhound Bound for Nowhere” off her 2005 album Kerosene, the country singer revealing to the audience she and her father have never sang their song together outside of a few campfire performances.

“I texted my mom last night and said, ‘Get on Southwest and come to Nashville,’” Lambert said prior to their performance according to The Tennessean. “My dad was my very first co-writer I ever had. He taught me how to play guitar and he taught me my love of music. Dad and I haven’t sang this song together, except by a campfire, in a long time.”

Taking the lead on vocals while her father provided her with backup on his acoustic guitar, the father-daughter duo captivated the audience with their meaningful performance. While the country singer’s father for the most part kept his singing to backup, his beautiful vocals shined through during a series of masterful harmonies.

Lambert went on to further thank everyone who came to support her that night and have had her back throughout the difficult period of her life, explaining she’s “just so thankful and humbled by it…they get down in the trenches with me and put words on paper. It’s very healing. Music is medicine.”