Miranda Lambert Relives Devastating Loss In Emotional ‘Over You’ 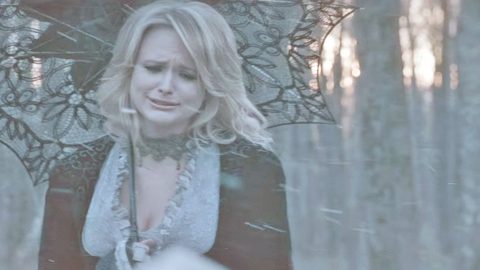 Country music star Miranda Lambert had fans fighting tears and heartache when her ballad “Over You” was released in 2011. To accompany the song, the singer released a music video that put a visual story to the already sad story. The video was set in the eerie wilderness, which embodied her performance with old trees and gloomy skies.

Dressed in a beautiful Victorian-inspired gown, Lambert started off the music video by helplessly wandering through empty woods. As she continued through the song, two young boys appeared in her scenes, playfully running through the woods and hiding from one another behind the large tree trunks. One of the younger boys vanishes, leaving his brother to search for him, but to no avail.

Lambert then comes across a set of gravestones, breaking down in tears when she reads the name of someone she once loved written on one.

The heart-wrenching ballad was written by both Lambert and fellow country star Blake Shelton. The song packed a powerful story, recanting Shelton’s loss of his brother at the age of 14 due to a tragic car wreck. Shelton gave the song to his then-wife Lambert out of his inability to record it, admitting that the emotional strain was too tough. It was released as Lambert’s second single from her 2012 album Four the Record.

You can experience Lambert’s unforgettable performance below, but be sure to keep your tissues handy.