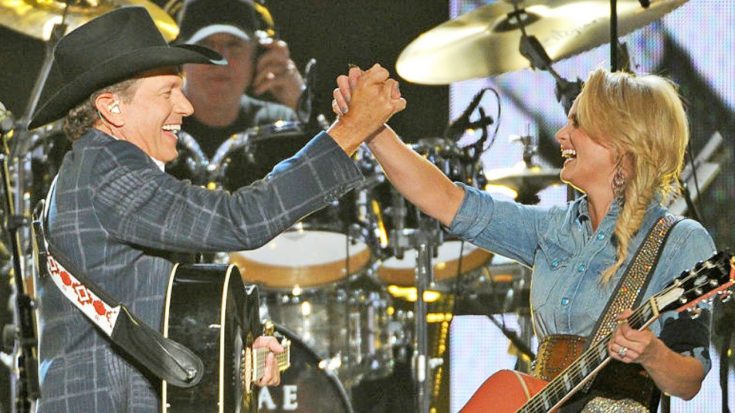 Before Miranda Lambert was making history as the most awarded Female Vocalist of the Year at the ACMs, she was an up and coming country singer going out on tour opening for a country superstar.

That superstar was The King of Country himself, George Strait. In 2006, he asked Lambert, fresh off the success of her first album Kerosene, to join him on the road. It was around the same time that Lambert got her first tattoo, which took up most of her forearm.

Her father, Rick, who famously gave her the title for her ACM Award-winning album The Weight of These Wings, also toured with her and was in charge of merchandise. He was not pleased with his young daughter’s decision to permanently ink guns and wings on her arm.

“My dad was really mad and wouldn’t talk to me because I had gotten a tattoo,” she said. “Somehow George found out about the drama between me and my dad and he sent out for, like, 75 press on tattoos, fake tattoos. We went to take our end of  tour picture and the whole group, like 60 people all had fake tattoos. My dad started laughing and my dad even had one. It sort of broke the ice between [us]. He talked to me again and wasn’t mad anymore. I like to say that George Strait helped mend my dad and my relationship over the tattoo incident.”

How many people can say that The King helped mend their relationship with their dad? Not many!

Watch her explain the story below.

Everyone has a George story, but Miranda Lambert's is tough to beat! Create your own memory with The King this weekend in Vegas! www.straittovegas.com #StraitToVegas