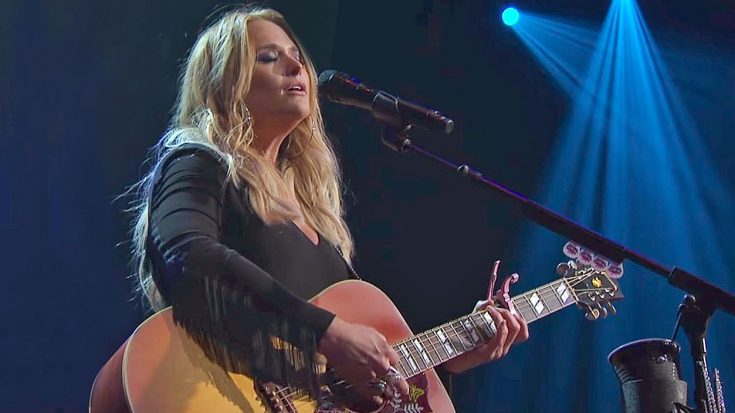 During the ACM Awards in April, Miranda Lambert managed to move millions with her solo acoustic performance of her single, “Tin Man.” Since then, Lambert has taken to performing the song like that on a regular basis, leaving her band behind to bring the emotion front and center.

That’s exactly what Lambert did when she performed a show in her home state of Texas for a taping of Austin City Limits. Her episode finally aired on Friday (November 3), and showed Lambert singing some of her most recognizable songs, including “The House That Built Me,” “Automatic,” and of course, “Tin Man.”

“Tin Man” is Lambert’s third single off of her critically acclaimed double album The Weight of These Wings. The song has climbed as high as the 15th spot on the Billboard Hot Country Songs chart and also peaked at the 75th position on the all-genre Billboard Hot 100.

The airing of Lambert’s Austin City Limits performance of “Tin Man” perfectly coordinates with the upcoming CMA Awards on Wednesday (November 8). “Tin Man” itself has been nominated for a total of two awards, including Single of the Year (which recognizes Lambert as the artist) and Song of the Year (which recognizes Lambert and her co-writers Jack Ingram and Jon Randall).

Lambert acknowledged her fellow writers leading up to her performance of “Tin Man” on Austin City Limits. Speaking to the crowd, she said, “I think we all needed to write this song. At the time that we wrote it, we all sort of took equal parts in each other’s pain and put it down on paper and on a record.”

After that, Lambert shared why she felt it was important for her to perform the song solo that night. “I wanted to do it by myself because I feel like that’s where it starts—with a song and a guitar and a person and a girl and some emotions, so I’m going to leave it there tonight,” she said.

With that, Lambert moved into her performance of “Tin Man.” Since you have nothing else to listen to but her guitar and her voice, you instantly find yourself drawn in to what she’s singing. As a result, each word carries more weight than it would have if she was performing with an entire band behind her. With a song like “Tin Man,” that deep connection is exactly what you want to experience.

You can catch Lambert’s heartfelt performance of “Tin Man” on Austin City Limits by viewing the video below. We could never tire of hearing her sing this one.