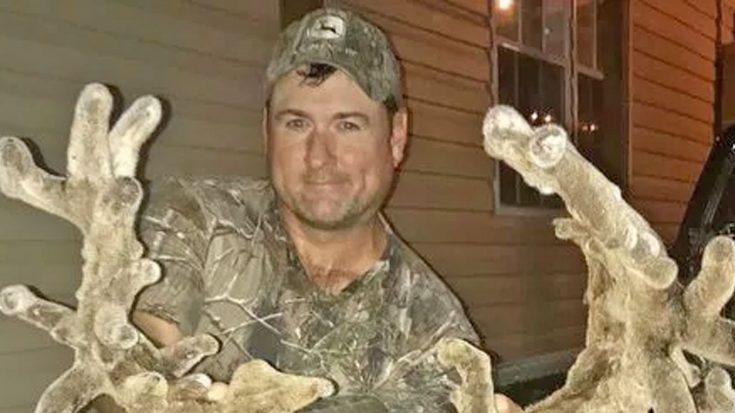 Avid hunter Stan Ethredge owns a couple hundred acres in Philadelphia, Mississippi that he hunts on every fall. For the past four years, he has been tracking a 6-point buck and knew that this year was his year to get him.

“I’ve been getting pictures of him for at least four years now. He was a big 6-point four years ago. He dropped his antlers and grew six points again. After the second year, he was a 6-point, I figured that was all he was going to be,” Ethredge told USA Today. “I figured he was a good cull buck, but I never got a shot at him. I just got pictures.”

As Ethredge was monitoring the buck through this past year, he noticed that he had surpassed the 6-point mark by quite a lot, and his antlers had several abnormalities including drop tines, stickers, and an excessive amount of velvet.

Usually, by the end of summer, bucks shed what most people call “velvet,” which is the hairy skin that forms over the antlers, but this particular buck had not. By the 2017 hunting season, the 6-point buck that Ethredge had been tracking for four years was now 36-points and had a 16-inch spread, measuring 227⅜ inches. While he is unsure why this buck’s antlers were so massive and unusual, William McKinley, the deer program coordinator for the Mississippi Department of Wildlife had an idea.

Upon inspecting the buck, he noticed that its reproductive organs were damaged, most likely causing it to stop producing testosterone.

“It’s not common, but it’s not uncommon. It could have been disease, it could have been a number of things. If a deer doesn’t have testosterone the antlers continue to grow. They never harden and they never lose velvet,” McKinley said.

Whatever the reason, Ethredge is now the proud owner of a rare and magnificent rack. McKinley told the hunter that it “wasn’t deer of a lifetime. It’s a deer of several lifetimes.” Have y’all ever seen anything quite like this before? We know we haven’t!