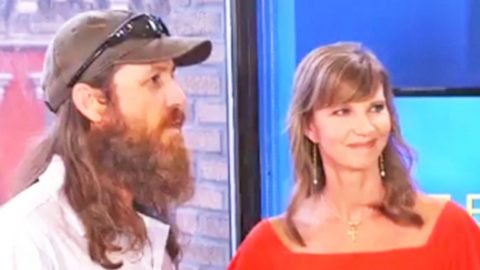 Fans of Duck Dynasty were crushed when they found out that their favorite TV show would be coming to an end in 2017. After five years, and eleven seasons of watching the bearded Robertson brothers maneuver life as outdoorsmen, family men, and men of God, fans really got to know Willie, Jase, Jep, and Alan, and their families on a more personal level.

Now that the show is over, we can keep up with the family on social media outlets including Facebook, Instagram, and Twitter. Some of the family members have also made appearances on shows like Fox & Friends since the show’s final episode to keep us in the loop.

Missy and Jase Robertson stopped by the Reelz Channel to talk about life after the Dynasty.

“Life after ‘Duck Dynasty’. What has it been like?” Reelz reporter Arthur Kade asked the couple.

All kidding aside, Missy said, “It’s freed us up to kind of turn our focus on other things.”

For example, she launched a jewelry line called Lamanin by Missy Robertson, which is inspired by the outdoors. Each piece of jewelry is made by women who have come out of difficult situations including addiction, sex trafficking, and more.

They are also putting all their energy in their foundation, the Mia Moo Fund, which raises money to help children with cleft lip and/or palate get the surgeries they need, even if their families can’t afford it.

Watch their interview about life after Duck Dynasty below.