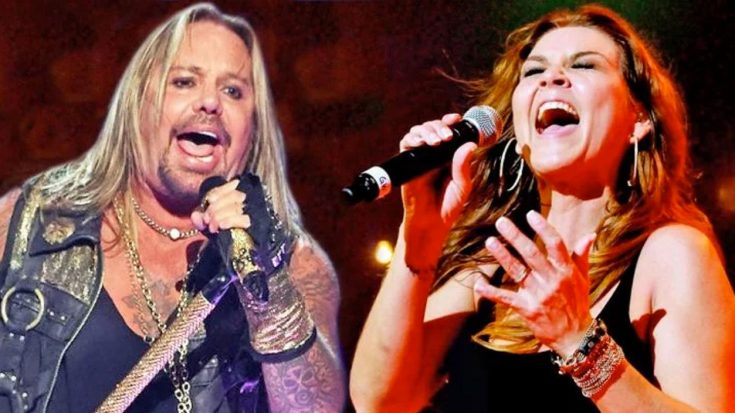 In 2014, country music paid tribute to one of the most legendary heavy metal bands of all time – Mötley Crüe.

Called Nashville Outlaws: A Tribute To Mötley Crüe, country singers including Justin Moore, who had a duet on the album with Mötley Crüe lead singer Vince Neil, Florida Georgia Line, Brantley Gilbert, Darius Rucker, The Cadillac Three, and the redneck woman herself, Gretchen Wilson, all came together to pay tribute to a band that has inspired all of them at some point.

Fans of Mötley Crüe have praised Wilson’s performance of “Wild Side” as the best of the whole album, especially since she stayed so true to the original.

She even received high praises from the band, with Neil saying, “She just went for it on this one. For a chick, it’s balls out. It kind of has this Joan Jett crazy chick, old-school vibe.”

“She’s going 110. Just on that thing. It’s sexy and it’s powerful and this is gonna be a stomper if she plays this live,” added bass player Nikki Sixx.

Mötley Crüe released “Wild Side” in 1987 off their album Girls, Girls, Girls, which went on to hit No. 2 on the Billboard 200 chart.

Our biggest complaint after hearing her sing “Wild Side” is that there is no live footage of her performing the song with the band! Take a listen to her rendition of the hard rocking song below.