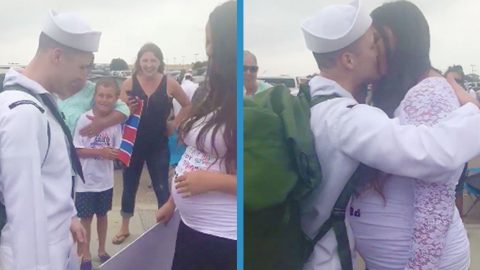 After six long months being deployed with the US Navy, Petty Officer 1st Class Chris Daugherty came home to a huge surprise.

He was welcomed off the USS Carl Vinson in June 2017 by his two daughters, son, wife Natasha, and their extended family. His children ran into his arms and after he smothered them with hugs and kisses, he went to greet his wife, who was holding sign that read, “Welcome Home, Baby Daddy!”

While he knew that they already had three children together, this wasn’t a tell-tale sign for what Natasha was about to reveal. As Chris was going in for a big hug, she lowered the sign, revealing her pregnant belly! Almost eight months pregnant, Natasha kept this secret the entire time her husband was deployed.

Shocked, he poked her belly and asked, “Is it real?”

After confirming that they were in fact pregnant with their fourth child, the couple embraced and kissed, making everyone around them emotional.

Chris took to Facebook to express his excitement for their new addition, which they later found out is going to be a girl!

Natasha wore a shirt that read, “I am the present my Daddy gave my Mommy before he deployed.”

It was an extremely hard secret to keep, but in the end, it was worth it to see his reaction! Watch the surprise pregnancy reveal below.

Here it is! The moment he sees the baby bump. He's so confused and in disbelief lol, asked if it was real and poked the belly ?? so funny! I cried lol