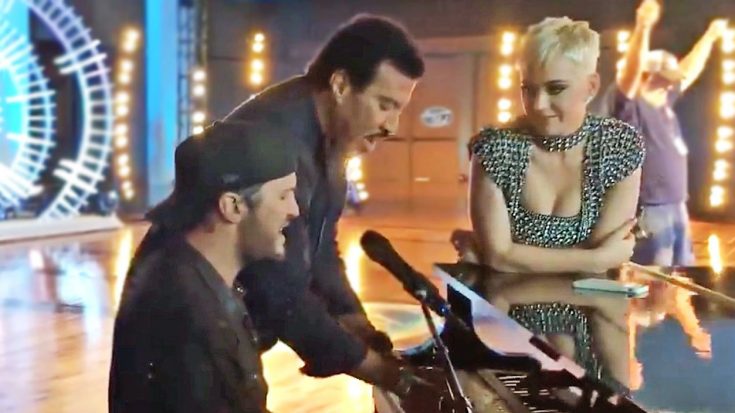 Luke Bryan has never tried to hide his admiration for Lionel Richie. He has performed covers of Richie’s songs for years, with his go-to piece being the 1984 country/pop hit, “Stuck on You.”

Luckily for Bryan, he’s had the opportunity to work with Richie on a number of occasions. The two have collaborated a handful of times before, perhaps most notably at the 2016 Grammy Awards. That year, Richie was being honored as the MusiCares Person of the Year, and Bryan was one of four artists who got the chance to perform with him during an all-star tribute.

Now, Bryan and Richie are able to get to know one another even better, as they have both served as judges for the rebooted version of American Idol. Along with fellow judge Katy Perry, the two have spent several seasons evaluating the talented singers who have shown up for the first few rounds of auditions.

When they aren’t working, the judges take time to bond with each other backstage. Richie and Bryan strengthened their friendship through a small series of piano lessons, in which Richie passed his years of wisdom on to his younger counterpart.

Richie took to social media to share a video of his piano lesson with Bryan. The video shows Bryan seated at a magnificent piano while Perry leans on the side and watches in fascination. Richie stands next to Bryan and encourages him, saying all he really needs to know is a batch of four chords.

You can’t help but smile as you watch Richie teach Bryan his secrets to playing the piano. Knowing how much respect Bryan has for Richie, we’re sure these little moments mean a great deal to him.

Later on, Richie shared another short clip of his continued piano lesson with Bryan. During this video, Bryan says that he’s nothing like Richie when it comes to piano playing. But Richie comes back with a good point about Bryan’s musical abilities, saying, “If I could play guitar, I’d really be something!”

Tune in below to watch both videos of Bryan and Richie’s piano lessons. If you need something to brighten your day, this is it!