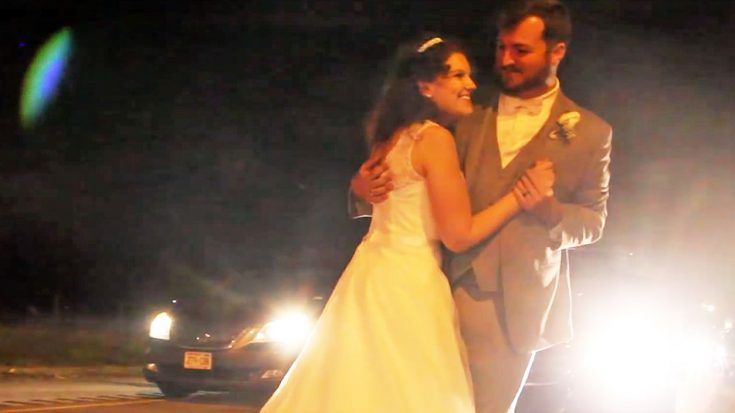 While many brides and grooms fear of a catastrophe that could possibly take place during what is said to be one of the happiest moments in life, this newlywed couple was definitely caught off guard when their plan gone wrong happened after their wedding! Headed to their reception, Jeff and Rebecca Payne of Centerville, Ohio weren’t expecting to encroach on a car accident that would shut down the highway for nearly two hours, according to Dayton Daily News! While no serious injuries were reported, the scene was still in need of cleanup.

These two definitely passed the first test of marriage, seeing that they stuck together to make the best of an unfortunate situation that not only left them late for their own celebration, but ultimately pushed the bride and groom to partake in a marital tradition with a very unique approach. Gracing a highway lit by nothing more than the headlights of other vehicles trapped on the road, the Paynes chose to have their first dance amidst a traffic disaster.

Various drivers exited their vehicles to photograph the couple and capture video footage of the doting newlyweds romantically dancing to Alison Krauss‘ version of the hit song “When You Say Nothing At All”. The groom spun his stunning bride while casually conversing with the mesmerized crowd. We wish all traffic jams could be this romantic!

We are enroute back to Chicago and shortly after we left, we found ourselves in a parking lot of traffic due to 5 car accident. Unfortunately for these two, they're within a half mile of the exit for their reception. We've all been sitting here for going on two hours. These newlyweds are in great spirits though as they're dancing in the middle of the highway and making lemonade from the lemons. Cheers to you two! Life together is all about pushing through adversity! #rescuethepaynes

Witnesses of the powerful moment posted their shots and footage with the hashtag “#RescueThePaynes“, flooding the two with beautiful footage to hold sacred of their first official dance. We’re glad to see these two were such good sports! Check out the video below!