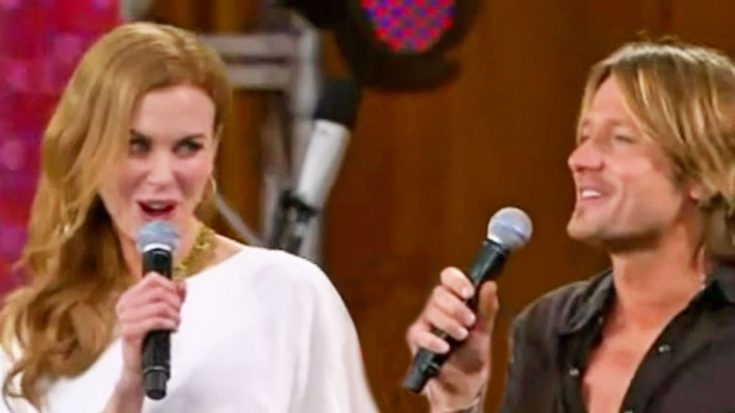 In 2005, Keith Urban met his future wife, actress Nicole Kidman, at a Hollywood event called G’Day LA, which was established to honor Australians. Urban was born in New Zealand, but eventually moved to Australia and started his country music career there. Kidman was born in Hawaii to Australian parents, and she spent her childhood growing up in Australia.

Today, Urban and Kidman are known as two of the most popular Australian stars in the entertainment industry. So that’s why it made perfect sense for them both to be on hand at another event honoring Australia.

Back in 2013, Oprah Winfrey travelled to Australia to film a special for her television show. As she prepared to leave, a massive crowd gathered outside the Sydney Opera House to watch a children’s choir send Winfrey off with a performance of the Peter Allen song, “I Still Call Australia Home.”

But there were a few surprises in store for the crowd. One by one, a number of popular Australian stars strolled out on the stage and started singing along with the choir. Any country music fans in the crowd surely rejoiced when they saw Olivia Newton-John among the cast of celebrities.

Urban emerged on stage after Newton-John, and the audience was quite pleased to see him. But they went absolutely nuts when Kidman came out from behind the choir to join her husband at his side.

With great fanfare, the two of them started singing together along with the other stars and the choir. Any fans of the couple know that Kidman can sing…she did so in the film Moulin Rouge and also provides backing vocals on Urban’s single, “Female.” But it’s a rare sight to see them singing together in person!

You can check out Urban and Kidman’s surprise collaboration in the clip below. We completely understand why the crowd was so excited to see them singing together!