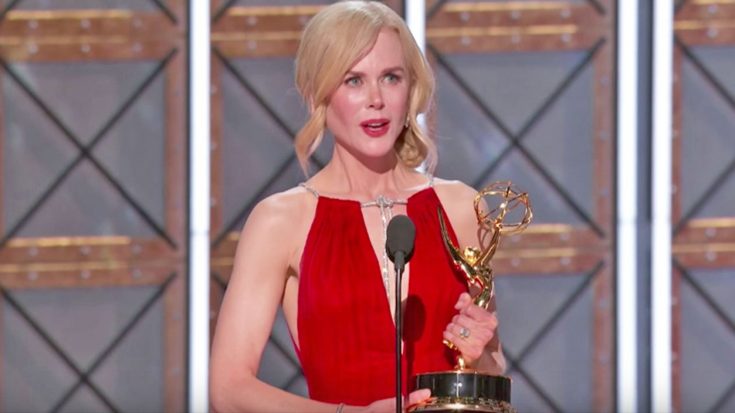 Nicole Kidman won big last night at the 69th Annual Emmy Awards for her role in HBO’s Big Little Lies, winning in the catefory of “Outstanding Lead Actress In A Limited Series.” While the Emmy was awarded to the Australian actress, Kidman took the moment to dedicate her massive win to those who mean the most to her.

“I am a mother and a wife. I have two little girls, Sunny and Faith, and my darling Keith [Urban],” said Kidman as she became noticeably more emotional. “Who I ask to help me pursue this artistic path and they have to sacrifice so much for it, so this is yours. I want my little girls to have this on their shelf and to look at it and go ‘Every time my momma didn’t put me into bed, it’s because of this!'”

An emotional Urban can be seen watching his wife giving her acceptance speech, the country singer beaming with pride as his wife delivered her beautiful dedication to him and their children. Kidman also took her moment on stage to discuss the issue of domestic violence in our nation.

“I also want them to know that sometimes when you’re acting you get a chance to bring a bigger message,” said Kidman before continuing, “We’ve shone a light on domestic abuse. It is a complicated disease, insidious disease. It exists far more than we let ourselves to know. It is filled with shame and secrecy, and by you acknowledging me with this award, it shines a light on it even more.”

Kidman took home the award for her stunning portrayal of Monterey Bay housewife, Celeste. On the outside. Celeste is a beautiful retired lawyer and mother of two, but behind closed doors, she is the victim of her husband’s psychosexual abuse. In addition to Kidman’s win, Big Little Lies stars Laura Dern and Alexander Skarsgard won in the categories of supporting actress and best supporting actor in addition to director Jean-Marc Vallee taking home an Emmy for best limited series.

You can watch the acceptance speech below!