Officer Pulls Lady Over For DUI, But His Partner Has Something Special For Her 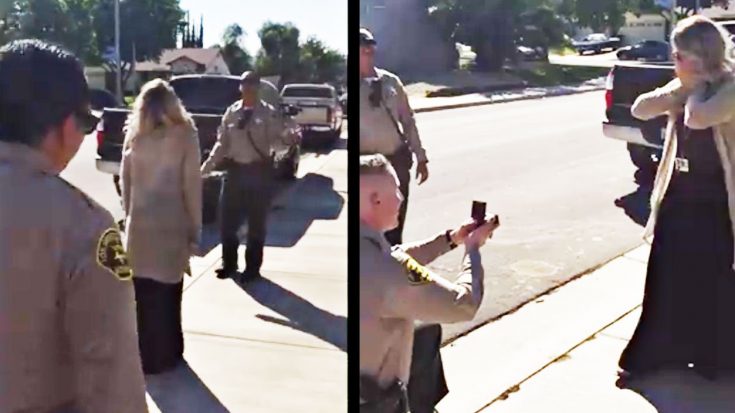 Driving through town just minding her own business, Ellen Alexander sees the cops behind her with their lights flashing, so she does what any reasonable person would do – pulls over.

It’s not until the police ask her to step out of the car to perform several field sobriety tests that she realizes they suspect her of driving under the influence. Complying with their requests, she steps up onto the sidewalk where they have her begin to walk in a straight line while touching her nose.

Moving down the walkway, Ellen has no idea what’s going on behind her back as she’s following the officer’s directions, but the camera is capturing everything!

A fellow member of the Palmdale Sheriff’s Station, Deputy Kevin Bowes quietly walks up behind her and gets down on one knee, extending his hand with an open ring box.

Breaking down in tears of happiness and covering her face with her hands, Ellen falls into Deputy Bowes arms, hugging him tightly as she says “Yes!”

Watch this unbelievable and beautiful moment where Deputy Kevin Bowes asks the woman of his dreams to marry him in one of the most creative ways!

Congratulations to future Mrs. Deputy Bowes
She thought she was a suspect DUI driver but it was a traffic stop that changed her life. Watch as Deputy Bowes proposes to his future wife. We are so happy for you brother, and thank you for allowing us to be part of this wonderful moment. Welcome to the Tan & Green family, and may you have a wonderful life together. #LASD #AV411 #SheSaidYes