Once Upon A Time, This Major Music Star Was A Rockin’ 4-Year-Old Elvis Impersonator

By Miranda Raye on August 9, 2016
Advertisement 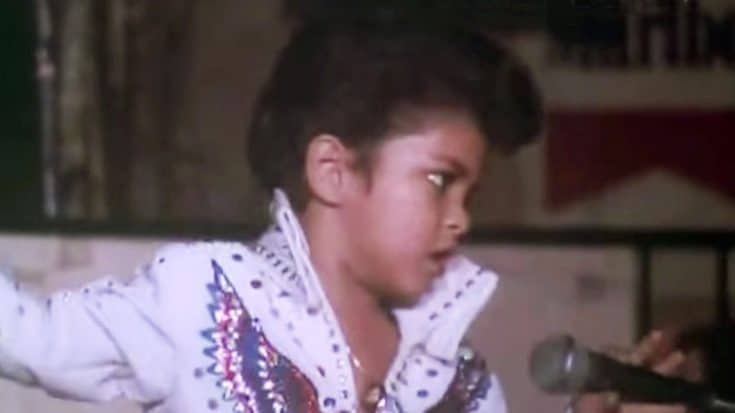 If you watched music superstar Bruno Mars perform during the halftime show at Super Bowl XLVIII, then you probably recall watching him pull off a series of Elvis-like dance moves.

But as it turns out, that wasn’t just a one time thing. Mars actually knows a lot more about acting like “The King” than you’d ever expect.

Born and raised in Honolulu, Mars grew up in a family filled with musical talent. Mars’ mother was a singer and his father performed a 1950s-style show with Little Richard music. In an interview with JustBrunomars.com, Mars shared that his uncle was also an Elvis impersonator.

He Got Started Young

Mars was interested in his uncle’s career path from a young age, and recalls asking him if he could join in his performance when he was only two or three years old. “I used to watch him and one day I said ‘Coach, put me in.’”

His uncle did just that, and by age four Mars was performing five days a week with his family’s band and became well-known for his own Elvis impersonation.

Mars and his father, Peter Hernandez, were interviewed during a special segment on the Jonathan Ross Show about Mars’ role as an Elvis impersonator. A clip from that interview shows a young Mars on stage all dressed up in a traditional Elvis costume.

Not only did Mars look the part, but he walked the walk and talked the talk. He pulled off one signature Elvis dance move after another, stunning the audience with every step he took.

He Was Such An Entertainer!

Plus, we can’t ignore the fact that Mars looked downright adorable standing up there on stage singing like Elvis. As Mars’ father explained to Ross, his son had a passion for all things Elvis that he simply couldn’t contain, so he channeled it into his performances.

When Ross asked Mars what he liked the most about Elvis, he had the cutest answer. “I like his singing, and his dance, and his lip,” Mars said, before proceeding to show off Elvis’ signature lip curl himself.

Mars revealed that he knew many of Elvis’ classic hits, including “All Shook Up” and “Hound Dog.” He continued impersonating Elvis for several years after his Jonathan Ross interview, and now that he is a star in his own right, Mars continues to rely on inspiration from “The King” in his performances.

You can watch the throwback video to Mars’ Elvis impersonation days in the video below. Brace yourself, because you aren’t ready for the cuteness you’re about to see!

Mars’ passion for Elvis’ music and dancing helped him develop his talent at a young age, and now he’s one of the best-selling artists of all time. He’s had numerous number one singles on the Billboard Hot 100 since starting his career in 2010, and he obtained the first five of those quicker than any male artist since…you guessed it…Elvis.