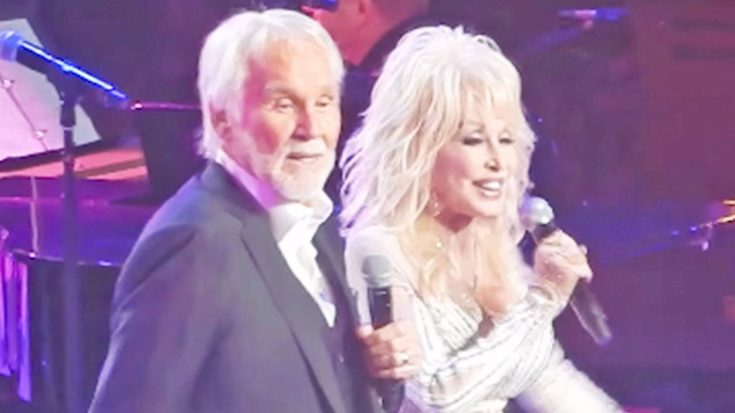 On October 25, 2017, some of country music’s biggest names came together to honor a legend. Chris Stapleton, Jamey Johnson, Reba McEntire, Charles Kelley, and Kris Kristofferson were some of the country singers in attendance to pay tribute to Kenny Rogers at his farewell concert that took place at Nashville’s Bridgestone Arena, appropriately called “All In For The Gambler.”

It wouldn’t be a night celebrating Rogers if his frequent duet partner Dolly Parton wasn’t there! Throughout the evening, he sat and watched incredible musicians sing his hits, but he did grace the stage to sing a couple of songs with Parton, including their legendary duet “Islands In The Stream.”

“It’s really been fun for me and tonight is as much about me saying ‘Thank you’ as it is ‘Goodbye’,” Rogers told the sold-out crowd.

After a few laughs between friends, the duo performed their 1983 smash hit, which brought the energy of the entire arena up about ten notches! From the first note of the musical introduction, you really can’t help but smile.

Watching these two legends perform their iconic song for the very last time is as enjoyable as it is sad, but being able to watch this video over and over again will let us remember the moment forever.

After the performance, the audience gave them a well-deserved standing ovation and Parton asked him, “Kenny? How ’bout we go out like rock stars?”

Together, they both raised their microphones high in the air and dropped them, causing the crowd to go absolutely wild!

Watch Rogers and Parton’s final duet to “Islands In The Stream,” and that iconic mic drop, below.