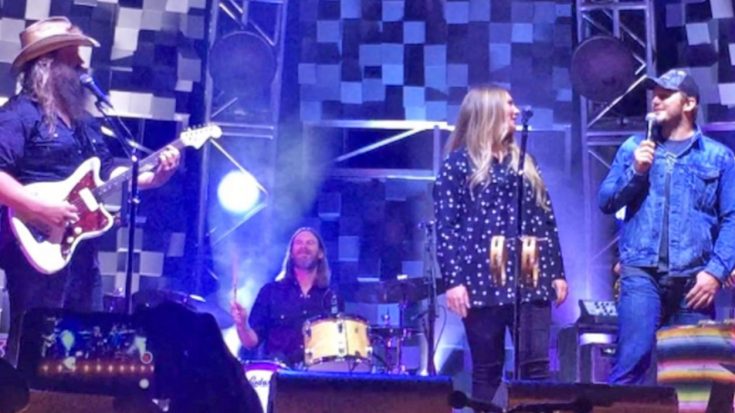 Fans at Chris Stapleton’s second sold-out concert in Nashville, Tennessee, were in for a treat during the finale performance. Concertgoers had no clue that one of the biggest Hollywood actors was in the audience, let alone backstage ready to surprise them.

Chris Pratt, who has been dominating the box offices for the last few years with the Guardians of the Galaxy movies and Jurassic World, is a known country music fan and a huge Chris Stapleton fan.

During press for one of his movies, a reporter asked him who his favorite singer was and he quickly said Stapleton’s name. The “Fire Away” singer heard about the interview and sent the actor a personalized cassette tape of his From A Room: Vol. 1 album, which completely surprised Pratt.

#chrisstapleton sent me my very own customized TAPE of his new album!!! #fromaroomvolume1 Totally unsolicited. Never met him. He musta heard what a big fan I am. If you haven't heard his music do so if you please. And go see #guardiansofthegalaxy 2 in theatres!

After knowing about their previous interaction, it doesn’t seem like too far a stretch for the Hollywood actor to grace Stapleton’s stage. Pratt is not known for his singing, but he is known his enthusiasm, which he had in full effect yelling the lyrics into his microphone as Stapleton and his wife, Morgane, were singing.

The crowd was loving Pratt being on stage, and so were we! Watch Pratt surprise the audience and sing with Stapleton below.